Almighty and everlasting God, Grant that all who have been reborn into the fellowship of Christ’s death and resurrection may practice in their lives what they profess in their faith; through Jesus Christ our Lord, who lives and reigns with you and the Holy Spirit, one God, for ever and ever. Amen.

Evil and death no longer have
any power over the Risen Christ.

For this is how God loved the world: He gave his one and only Son, so that everyone who believes in him will not perish but have eternal life. God sent his Son into the world not to judge the world, but to save the world through him. 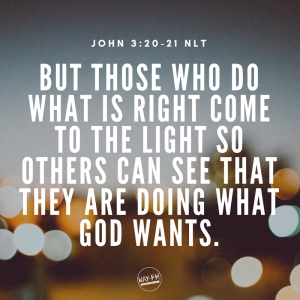 “There is no judgment against anyone who believes in him. But anyone who does not believe in him has already been judged for not believing in God’s one and only Son. And the judgment is based on this fact: God’s light came into the world, but people loved the darkness more than the light, for their actions were evil. All who do evil hate the light and refuse to go near it for fear their sins will be exposed. But those who do what is right come to the light so others can see that they are doing what God wants.”
__________

The high priest and his officials, who were Sadducees, were filled with jealousy. They arrested the apostles and put them in the public jail. But an angel of the Lord came at night, opened the gates of the jail, and brought them out. Then he told them, “Go to the Temple and give the people this message of life!”

So at daybreak the apostles entered the Temple, as they were told, and immediately began teaching.

When the high priest and his officials arrived, they convened the high council—the full assembly of the elders of Israel. Then they sent for the apostles to be brought from the jail for trial. But when the Temple guards went to the jail, the men were gone. So they returned to the council and reported, “The jail was securely locked, with the guards standing outside, but when we opened the gates, no one was there!”

When the captain of the Temple guard and the leading priests heard this, they were perplexed, wondering where it would all end. Then someone arrived with startling news: “The men you put in jail are standing in the Temple, teaching the people!”

The captain went with his Temple guards and arrested the apostles, but without violence, for they were afraid the people would stone them.
__________

I will praise the Lord at all times.
I will constantly speak his praises.

I will boast only in the Lord;
let all who are helpless take heart.

Come, let us tell of the Lord’s greatness;
let us exalt his name together.