Almighty God, whose most dear Son suffered pain and was crucified before he was raised to joy and  entered into glory: Mercifully grant that we, walking in the way of the Cross, may find it none other than the way of life and peace; through Jesus Christ our Lord, who lives and reigns with you and the Holy Spirit, one God, for ever and ever. Amen.
__________

The Unbelief of the People

But despite all the miraculous signs Jesus had done, most of the people still did not believe in him. This is exactly what Isaiah the prophet had predicted:

“Lord, who has believed our message?
To whom has the Lord revealed his powerful arm?”
_____

Many people did believe in him, however, including some of the Jewish leaders. But they wouldn’t admit it for fear that the Pharisees would expel them from the synagogue. For they loved human praise more than the praise of God.

Jesus shouted to the crowds, “If you trust me, you are trusting not only me, but also God who sent me. For when you see me, you are seeing the one who sent me. I have come as a light to shine in this dark world, so that all who put their trust in me will no longer remain in the dark. I will not judge those who hear me but don’t obey me, for I have come to save the world and not to judge it. But all who reject me and my message will be judged on the day of judgment by the truth I have spoken. I don’t speak on my own authority. The Father who sent me has commanded me what to say and how to say it. And I know his commands lead to eternal life; so I say whatever the Father tells me to say.”
__________
A Reading from the Old Testament: Isaiah 49:1-6 (NLT)

Listen to me, all you in distant lands!
Pay attention, you who are far away!
The Lord called me before my birth;
from within the womb he called me by name.
He made my words of judgment as sharp as a sword.
He has hidden me in the shadow of his hand.
I am like a sharp arrow in his quiver.

He said to me, “You are my servant, Israel,
and you will bring me glory.”

I replied, “But my work seems so useless!
I have spent my strength for nothing and to no purpose.
Yet I leave it all in the Lord’s hand;
I will trust God for my reward.” 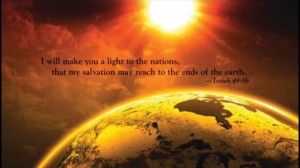 And now the Lord speaks—
the one who formed me in my mother’s womb to be his servant,
who commissioned me to bring Israel back to him.
The Lord has honored me,
and my God has given me strength.
He says, “You will do more than restore the people of Israel to me.
I will make you a light to the Gentiles,
and you will bring my salvation to the ends of the earth.”
__________

The Wisdom of God

The message of the cross is foolish to those who are headed for destruction! But we who are being saved know it is the very power of God. As the Scriptures say,

So where does this leave the philosophers, the scholars, and the world’s brilliant debaters? God has made the wisdom of this world look foolish. Since God in his wisdom saw to it that the world would never know him through human wisdom, he has used our foolish preaching to save those who believe. It is foolish to the Jews, who ask for signs from heaven. And it is foolish to the Greeks, who seek human wisdom. So when we preach that Christ was crucified, the Jews are offended and the Gentiles say it’s all nonsense.

But to those called by God to salvation, both Jews and Gentiles, Christ is the power of God and the wisdom of God. This foolish plan of God is wiser than the wisest of human plans, and God’s weakness is stronger than the greatest of human strength.

Remember, dear brothers and sisters, that few of you were wise in the world’s eyes or powerful or wealthy when God called you. Instead, God chose things the world considers foolish in order to shame those who think they are wise. And he chose things that are powerless to shame those who are powerful. God chose things despised by the world, things counted as nothing at all, and used them to bring to nothing what the world considers important. As a result, no one can ever boast in the presence of God.

God has united you with Christ Jesus. For our benefit God made him to be wisdom itself. Christ made us right with God; he made us pure and holy, and he freed us from sin. Therefore, as the Scriptures say, “If you want to boast, boast only about the Lord.”
__________

Lord God of heaven and earth, you have commissioned Your Son to restore Israel, and to bring Your salvation to the ends of the earth: Hear our prayers –

+ that the Good News might go forth with great power to the ends of the earth, reaching many millions as never before this Easter….

+ that churches in every tribe and nation may connect creatively with people in their homes even though their church doors are closed….

+ that message of the Cross would confound the worldly wise and wealthy, and that the powerless would put to shame the powerful….

+ that those who are seeking relief from the physical effects of the pandemic would turn to You to restore their souls as well as their bodies….

+ that those who are suffering great economic hardship because of the pandemic would trust You to guide them financially and begin laying up treasures in heaven….

+ that pastors and church leaders around the world who have been discouraged or disheartened may be empowered by Your Spirit to speak words of life and hope as never before….

Lord God of heaven and earth, we place our hope and trust in Your Son our Savior; shine Your light in our darkness that we may bring glory to Your name. Amen.

God has united you with Christ Jesus. For our benefit God made him to be wisdom itself. Christ made us right with God; he made us pure and holy, and he freed us from sin. Therefore, as the Scriptures say, “If you want to boast, boast only about the Lord.”