The Presentation of Christ in the Temple

[The Presentation of Christ is celebrated forty days after the birth of Jesus at Christmas. This feast is also called Candlemas because on this day Jesus was revealed in the Temple as the light of the world.]

Almighty and everliving God, we humbly pray that, as your only-begotten Son was this day presented in the temple in the substance of our flesh, so we may be presented to you with pure and clean hearts by Jesus Christ our Lord; who lives and reigns with you and the Holy Spirit, one God, now and for ever. Amen.
__________

“Light of the World” – Lauren Daigle

Then it was time for their purification offering, as required by the law of Moses after the birth of a child; so his parents took him to Jerusalem to present him to the Lord. The law of the Lord says, “If a woman’s first child is a boy, he must be dedicated to the Lord.” So they offered the sacrifice required in the law of the Lord—“either a pair of turtledoves or two young pigeons.”

The Prophecy of Simeon

At that time there was a man in Jerusalem named Simeon. He was righteous and devout and was eagerly waiting for the Messiah to come and rescue Israel. The Holy Spirit was upon him and had revealed to him that he would not die until he had seen the Lord’s Messiah. That day the Spirit led him to the Temple. So when Mary and Joseph came to present the baby Jesus to the Lord as the law required, Simeon was there. He took the child in his arms and praised God, saying, 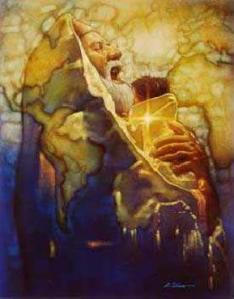 “Sovereign Lord, now let your servant die in peace,
as you have promised. I have seen your salvation,
which you have prepared for all people.
He is a light to reveal God to the nations,
and he is the glory of your people Israel!”

Jesus’ parents were amazed at what was being said about him. Then Simeon blessed them, and he said to Mary, the baby’s mother, “This child is destined to cause many in Israel to fall, and many others to rise. He has been sent as a sign from God, but many will oppose him. As a result, the deepest thoughts of many hearts will be revealed. And a sword will pierce your very soul.”

The Prophecy of Anna

Anna, a prophet, was also there in the Temple. She was the daughter of Phanuel from the tribe of Asher, and she was very old. Her husband died when they had been married only seven years. Then she lived as a widow to the age of eighty-four. She never left the Temple but stayed there day and night, worshiping God with fasting and prayer. She came along just as Simeon was talking with Mary and Joseph, and she began praising God. She talked about the child to everyone who had been waiting expectantly for God to rescue Jerusalem.

When Jesus’ parents had fulfilled all the requirements of the law of the Lord, they returned home to Nazareth in Galilee. There the child grew up healthy and strong. He was filled with wisdom, and God’s favor was on him.
__________

“The Light Of the World Is Jesus” – Philip Bliss

King of Glory, you have appeared among us: shine your light in our darkness; we pray especially –

+ That all who worship you may respect one another regardless of our cultural differences….

+ That the godly lives and witness of faithful believers everywhere may lead the faithless to believe….

+ That those who serve and minister in remote places around the world may be renewed and refreshed….

+ That the elderly everywhere may be cherished and those who are sick in body, mind or spirit may be healed….

+ That our land may be healed through an outpouring of your Spirit that leads to repentance and revival….

King of Glory, we proclaim Jesus as the light of the world: hear our prayers we offer in his name and grant them – through Christ our Lord. Amen.
__________

A single day in your courts is better than a thousand anywhere else!
I would rather be a gatekeeper in the house of my God
than live the good life in the homes of the wicked.

Tags: 02 Feb 2020, Anglican Church in North America, Daily Reading, Jesus Christ, Luke 2:22-40, Morning Prayer, The Presentation of Christ in the Temple, The Prophecy of Anna, The Prophecy of Simeon, Worship