One day as Jesus was preaching on the shore of the Sea of Galilee, great crowds pressed in on him to listen to the word of God. He noticed two empty boats at the water’s edge, for the fishermen had left them and were washing their nets. Stepping into one of the boats, Jesus asked Simon, its owner, to push it out into the water. So he sat in the boat and taught the crowds from there.

When he had finished speaking, he said to Simon, “Now go out where it is deeper, and let down your nets to catch some fish.”

“Master,” Simon replied, “we worked hard all last night and didn’t catch a thing. But if you say so, I’ll let the nets down again.” And this time their nets were so full of fish they began to tear! A shout for help brought their partners in the other boat, and soon both boats were filled with fish and on the verge of sinking.

When Simon Peter realized what had happened, he fell to his knees before Jesus and said, “Oh, Lord, please leave me—I’m such a sinful man.” For he was awestruck by the number of fish they had caught, as were the others with him. His partners, James and John, the sons of Zebedee, were also amazed.

Jesus replied to Simon, “Don’t be afraid! From now on you’ll be fishing for people!” And as soon as they landed, they left everything and followed Jesus.

Jesus Heals a Man with Leprosy

In one of the villages, Jesus met a man with an advanced case of leprosy. When the man saw Jesus, he bowed with his face to the ground, begging to be healed. “Lord,” he said, “if you are willing, you can heal me and make me clean.”

Jesus reached out and touched him. 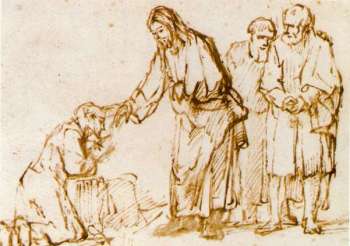 “I am willing,” he said. “Be healed!” And instantly the leprosy disappeared. Then Jesus instructed him not to tell anyone what had happened. He said, “Go to the priest and let him examine you. Take along the offering required in the law of Moses for those who have been healed of leprosy. This will be a public testimony that you have been cleansed.”

But despite Jesus’ instructions, the report of his power spread even faster, and vast crowds came to hear him preach and to be healed of their diseases. But Jesus often withdrew to the wilderness for prayer.

One day while Jesus was teaching, some Pharisees and teachers of religious law were sitting nearby. (It seemed that these men showed up from every village in all Galilee and Judea, as well as from Jerusalem.) And the Lord’s healing power was strongly with Jesus.

Some men came carrying a paralyzed man on a sleeping mat. They tried to take him inside to Jesus, but they couldn’t reach him because of the crowd. So they went up to the roof and took off some tiles. Then they lowered the sick man on his mat down into the crowd, right in front of Jesus. Seeing their faith, Jesus said to the man, “Young man, your sins are forgiven.”

But the Pharisees and teachers of religious law said to themselves, “Who does he think he is? That’s blasphemy! Only God can forgive sins!”

Jesus knew what they were thinking, so he asked them, “Why do you question this in your hearts Is it easier to say ‘Your sins are forgiven,’ or ‘Stand up and walk’? So I will prove to you that the Son of Man has the authority on earth to forgive sins.” Then Jesus turned to the paralyzed man and said, “Stand up, pick up your mat, and go home!”

And immediately, as everyone watched, the man jumped up, picked up his mat, and went home praising God. Everyone was gripped with great wonder and awe, and they praised God, exclaiming, “We have seen amazing things today!”

Later, as Jesus left the town, he saw a tax collector named Levi sitting at his tax collector’s booth. “Follow me and be my disciple,” Jesus said to him. So Levi got up, left everything, and followed him.

Later, Levi held a banquet in his home with Jesus as the guest of honor. Many of Levi’s fellow tax collectors and other guests also ate with them. But the Pharisees and their teachers of religious law complained bitterly to Jesus’ disciples, “Why do you eat and drink with such scum?”

Jesus answered them, “Healthy people don’t need a doctor—sick people do. I have come to call not those who think they are righteous, but those who know they are sinners and need to repent.”

A Discussion about Fasting

One day some people said to Jesus, “John the Baptist’s disciples fast and pray regularly, and so do the disciples of the Pharisees. Why are your disciples always eating and drinking?”

Jesus responded, “Do wedding guests fast while celebrating with the groom? Of course not. But someday the groom will be taken away from them, and then they will fast.”

Then Jesus gave them this illustration: “No one tears a piece of cloth from a new garment and uses it to patch an old garment. For then the new garment would be ruined, and the new patch wouldn’t even match the old garment.

“And no one puts new wine into old wineskins. For the new wine would burst the wineskins, spilling the wine and ruining the skins. New wine must be stored in new wineskins. But no one who drinks the old wine seems to want the new wine. ‘The old is just fine,’ they say.”

A Discussion about the Sabbath

One Sabbath day as Jesus was walking through some grainfields, his disciples broke off heads of grain, rubbed off the husks in their hands, and ate the grain. But some Pharisees said, “Why are you breaking the law by harvesting grain on the Sabbath?”

Jesus replied, “Haven’t you read in the Scriptures what David did when he and his companions were hungry? He went into the house of God and broke the law by eating the sacred loaves of bread that only the priests can eat. He also gave some to his companions.” And Jesus added, “The Son of Man is Lord, even over the Sabbath.”

Jesus Heals on the Sabbath

On another Sabbath day, a man with a deformed right hand was in the synagogue while Jesus was teaching. The teachers of religious law and the Pharisees watched Jesus closely. If he healed the man’s hand, they planned to accuse him of working on the Sabbath.

But Jesus knew their thoughts. He said to the man with the deformed hand, “Come and stand in front of everyone.” So the man came forward. Then Jesus said to his critics, “I have a question for you. Does the law permit good deeds on the Sabbath, or is it a day for doing evil? Is this a day to save life or to destroy it?”

He looked around at them one by one and then said to the man, “Hold out your hand.” So the man held out his hand, and it was restored! At this, the enemies of Jesus were wild with rage and began to discuss what to do with him.

One day soon afterward Jesus went up on a mountain to pray, and he prayed to God all night. At daybreak he called together all of his disciples and chose twelve of them to be apostles. Here are their names:

When they came down from the mountain, the disciples stood with Jesus on a large, level area, surrounded by many of his followers and by the crowds.

There were people from all over Judea and from Jerusalem and from as far north as the seacoasts of Tyre and Sidon. They had come to hear him and to be healed of their diseases; and those troubled by evil spirits were healed. Everyone tried to touch him, because healing power went out from him, and he healed everyone.

Then Jesus turned to his disciples and said,

What blessings await you when people hate you and exclude you and mock you and curse you as evil because you follow the Son of Man. When that happens, be happy! Yes, leap for joy! For a great reward awaits you in heaven. And remember, their ancestors treated the ancient prophets that same way. 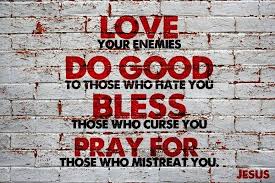 “But to you who are willing to listen, I say, love your enemies! Do good to those who hate you. Bless those who curse you. Pray for those who hurt you. If someone slaps you on one cheek, offer the other cheek also. If someone demands your coat, offer your shirt also. Give to anyone who asks; and when things are taken away from you, don’t try to get them back. Do to others as you would like them to do to you.

“Love your enemies! Do good to them. Lend to them without expecting to be repaid. Then your reward from heaven will be very great, and you will truly be acting as children of the Most High, for he is kind to those who are unthankful and wicked. You must be compassionate, just as your Father is compassionate.

Do Not Judge Others 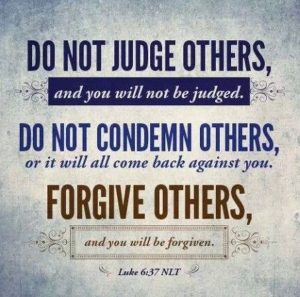 Give, and you will receive. Your gift will return to you in full—pressed down, shaken together to make room for more, running over, and poured into your lap. The amount you give will determine the amount you get back.”

Then Jesus gave the following illustration: “Can one blind person lead another? Won’t they both fall into a ditch? Students are not greater than their teacher. But the student who is fully trained will become like the teacher.

The Tree and Its Fruit

“A good tree can’t produce bad fruit, and a bad tree can’t produce good fruit. A tree is identified by its fruit. Figs are never gathered from thornbushes, and grapes are not picked from bramble bushes. A good person produces good things from the treasury of a good heart, and an evil person produces evil things from the treasury of an evil heart. What you say flows from what is in your heart.

Building on a Solid Foundation

“So why do you keep calling me ‘Lord, Lord!’ when you don’t do what I say? I will show you what it’s like when someone comes to me, listens to my teaching, and then follows it. It is like a person building a house who digs deep and lays the foundation on solid rock. When the floodwaters rise and break against that house, it stands firm because it is well built. But anyone who hears and doesn’t obey is like a person who builds a house right on the ground, without a foundation. When the floods sweep down against that house, it will collapse into a heap of ruins.”
__________