The Council at Jerusalem

Acts 15:1-2, 6-13, 19-21 (NLT) – While Paul and Barnabas were at Antioch of Syria, some men from Judea arrived and began to teach the believers: “Unless you are circumcised as required by the law of Moses, you cannot be saved.” Paul and Barnabas disagreed with them, arguing vehemently. Finally, the church decided to send Paul and Barnabas to Jerusalem, accompanied by some local believers, to talk to the apostles and elders about this question….
_____

So the apostles and elders met together to resolve this issue. At the meeting, after a long discussion, Peter stood and addressed them as follows: “Brothers, you all know that God chose me from among you some time ago to preach to the Gentiles so that they could hear the Good News and believe. God knows people’s hearts, and he confirmed that he accepts Gentiles by giving them the Holy Spirit, just as he did to us. He made no distinction between us and them, for he cleansed their hearts through faith. So why are you now challenging God by burdening the Gentile believers with a yoke that neither we nor our ancestors were able to bear? We believe that we are all saved the same way, by the undeserved grace of the Lord Jesus.”

Everyone listened quietly as Barnabas and Paul told about the miraculous signs and wonders God had done through them among the Gentiles.

When they had finished, James stood and said, “Brothers, listen to me….
_____

“And so my judgment is that we should not make it difficult for the Gentiles who are turning to God. Instead, we should write and tell them to abstain from eating food offered to idols, from sexual immorality, from eating the meat of strangled animals, and from consuming blood. For these laws of Moses have been preached in Jewish synagogues in every city on every Sabbath for many generations.”

The Letter for Gentile Believers

Acts 15:22-23, 28-35 (NLT) – Then the apostles and elders together with the whole church in Jerusalem chose delegates, and they sent them to Antioch of Syria with Paul and Barnabas to report on this decision. The men chosen were two of the church leaders—Judas (also called Barsabbas) and Silas. This is the letter they took with them:

“This letter is from the apostles and elders, your brothers in Jerusalem. It is written to the Gentile believers in Antioch, Syria, and Cilicia. Greetings!
_____

“It seemed good to the Holy Spirit and to us to lay no greater burden on you than these few requirements: You must abstain from eating food offered to idols, from consuming blood or the meat of strangled animals, and from sexual immorality. If you do this, you will do well. Farewell.”

The messengers went at once to Antioch, where they called a general meeting of the believers and delivered the letter. And there was great joy throughout the church that day as they read this encouraging message.

Then Judas and Silas, both being prophets, spoke at length to the believers, encouraging and strengthening their faith. They stayed for a while, and then the believers sent them back to the church in Jerusalem with a blessing of peace. Paul and Barnabas stayed in Antioch. They and many others taught and preached the word of the Lord there.

Acts 15:36-41 (NLT) – After some time Paul said to Barnabas, “Let’s go back and visit each city where we previously preached the word of the Lord, to see how the new believers are doing.” Barnabas agreed and wanted to take along John Mark. But Paul disagreed strongly, since John Mark had deserted them in Pamphylia and had not continued with them in their work. Their disagreement was so sharp that they separated. Barnabas took John Mark with him and sailed for Cyprus. Paul chose Silas, and as he left, the believers entrusted him to the Lord’s gracious care. Then he traveled throughout Syria and Cilicia, strengthening the churches there. 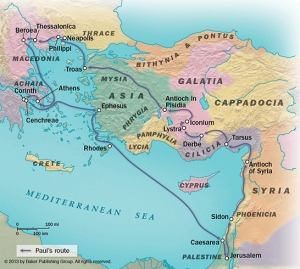 Acts 16:1-5 (NLT) – Paul went first to Derbe and then to Lystra, where there was a young disciple named Timothy. His mother was a Jewish believer, but his father was a Greek. Timothy was well thought of by the believers in Lystra and Iconium, so Paul wanted him to join them on their journey. In deference to the Jews of the area, he arranged for Timothy to be circumcised before they left, for everyone knew that his father was a Greek. Then they went from town to town, instructing the believers to follow the decisions made by the apostles and elders in Jerusalem. So the churches were strengthened in their faith and grew larger every day.

Acts 16:6-10 (NLT) – Next Paul and Silas traveled through the area of Phrygia and Galatia, because the Holy Spirit had prevented them from preaching the word in the province of Asia at that time. Then coming to the borders of Mysia, they headed north for the province of Bithynia, but again the Spirit of Jesus did not allow them to go there. So instead, they went on through Mysia to the seaport of Troas.

That night Paul had a vision: A man from Macedonia in northern Greece was standing there, pleading with him, “Come over to Macedonia and help us!” So we decided to leave for Macedonia at once, having concluded that God was calling us to preach the Good News there.

Acts 16:11-15 (NLT) – We boarded a boat at Troas and sailed straight across to the island of Samothrace, and the next day we landed at Neapolis. From there we reached Philippi, a major city of that district of Macedonia and a Roman colony. And we stayed there several days. 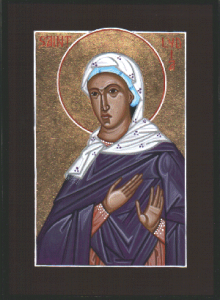 On the Sabbath we went a little way outside the city to a riverbank, where we thought people would be meeting for prayer, and we sat down to speak with some women who had gathered there. One of them was Lydia from Thyatira, a merchant of expensive purple cloth, who worshiped God. As she listened to us, the Lord opened her heart, and she accepted what Paul was saying. She and her household were baptized, and she asked us to be her guests. “If you agree that I am a true believer in the Lord,” she said, “come and stay at my home.” And she urged us until we agreed.

Acts 16:16-21 (NLT) – One day as we were going down to the place of prayer, we met a slave girl who had a spirit that enabled her to tell the future. She earned a lot of money for her masters by telling fortunes. She followed Paul and the rest of us, shouting, “These men are servants of the Most High God, and they have come to tell you how to be saved.”

This went on day after day until Paul got so exasperated that he turned and said to the demon within her, “I command you in the name of Jesus Christ to come out of her.” And instantly it left her.

Her masters’ hopes of wealth were now shattered, so they grabbed Paul and Silas and dragged them before the authorities at the marketplace. “The whole city is in an uproar because of these Jews!” they shouted to the city officials. “They are teaching customs that are illegal for us Romans to practice.”

Acts 16:22-28 (NLT) – A mob quickly formed against Paul and Silas, and the city officials ordered them stripped and beaten with wooden rods. They were severely beaten, and then they were thrown into prison. The jailer was ordered to make sure they didn’t escape. So the jailer put them into the inner dungeon and clamped their feet in the stocks. 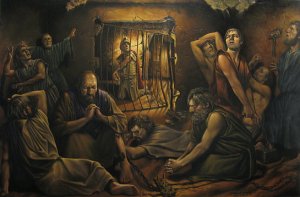 Around midnight Paul and Silas were praying and singing hymns to God, and the other prisoners were listening. Suddenly, there was a massive earthquake, and the prison was shaken to its foundations. All the doors immediately flew open, and the chains of every prisoner fell off! The jailer woke up to see the prison doors wide open. He assumed the prisoners had escaped, so he drew his sword to kill himself. But Paul shouted to him, “Stop! Don’t kill yourself! We are all here!”

Acts 16:29-34 (NLT) – The jailer called for lights and ran to the dungeon and fell down trembling before Paul and Silas. Then he brought them out and asked, “Sirs, what must I do to be saved?”

They replied, “Believe in the Lord Jesus and you will be saved, along with everyone in your household.” And they shared the word of the Lord with him and with all who lived in his household. Even at that hour of the night, the jailer cared for them and washed their wounds. Then he and everyone in his household were immediately baptized. He brought them into his house and set a meal before them, and he and his entire household rejoiced because they all believed in God.

But Paul replied, “They have publicly beaten us without a trial and put us in prison—and we are Roman citizens. So now they want us to leave secretly? Certainly not! Let them come themselves to release us!”

When the police reported this, the city officials were alarmed to learn that Paul and Silas were Roman citizens. So they came to the jail and apologized to them. Then they brought them out and begged them to leave the city. When Paul and Silas left the prison, they returned to the home of Lydia. There they met with the believers and encouraged them once more. Then they left town.
__________