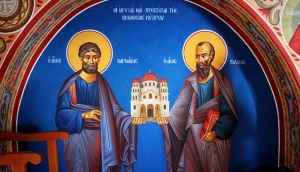 Acts 13:1-3 (NLT) – Among the prophets and teachers of the church at Antioch of Syria were Barnabas, Simeon (called “the black man”), Lucius (from Cyrene), Manaen (the childhood companion of King Herod Antipas), and Saul. One day as these men were worshiping the Lord and fasting, the Holy Spirit said, “Appoint Barnabas and Saul for the special work to which I have called them.” So after more fasting and prayer, the men laid their hands on them and sent them on their way.

Acts 13:4-12 (NLT) – So Barnabas and Saul were sent out by the Holy Spirit. They went down to the seaport of Seleucia and then sailed for the island of Cyprus. There, in the town of Salamis, they went to the Jewish synagogues and preached the word of God. John Mark went with them as their assistant.

Afterward they traveled from town to town across the entire island until finally they reached Paphos, where they met a Jewish sorcerer, a false prophet named Bar-Jesus. He had attached himself to the governor, Sergius Paulus, who was an intelligent man. The governor invited Barnabas and Saul to visit him, for he wanted to hear the word of God. But Elymas, the sorcerer (as his name means in Greek), interfered and urged the governor to pay no attention to what Barnabas and Saul said. He was trying to keep the governor from believing.

Saul, also known as Paul, was filled with the Holy Spirit, and he looked the sorcerer in the eye. Then he said, “You son of the devil, full of every sort of deceit and fraud, and enemy of all that is good! Will you never stop perverting the true ways of the Lord? Watch now, for the Lord has laid his hand of punishment upon you, and you will be struck blind. You will not see the sunlight for some time.” Instantly mist and darkness came over the man’s eyes, and he began groping around begging for someone to take his hand and lead him.

When the governor saw what had happened, he became a believer, for he was astonished at the teaching about the Lord.

Paul Preaches to the Jews

Acts 13:13-16, 26-33, 38-39, 42-43 (NLT) – Paul and his companions then left Paphos by ship for Pamphylia, landing at the port town of Perga. There John Mark left them and returned to Jerusalem. But Paul and Barnabas traveled inland to Antioch of Pisidia.

On the Sabbath they went to the synagogue for the services. After the usual readings from the books of Moses and the prophets, those in charge of the service sent them this message: “Brothers, if you have any word of encouragement for the people, come and give it.”

So Paul stood, lifted his hand to quiet them, and started speaking. “Men of Israel,” he said, “and you God-fearing Gentiles, listen to me.
_____

“Brothers—you sons of Abraham, and also you God-fearing Gentiles—this message of salvation has been sent to us! The people in Jerusalem and their leaders did not recognize Jesus as the one the prophets had spoken about. Instead, they condemned him, and in doing this they fulfilled the prophets’ words that are read every Sabbath. They found no legal reason to execute him, but they asked Pilate to have him killed anyway.

“When they had done all that the prophecies said about him, they took him down from the cross and placed him in a tomb. But God raised him from the dead! And over a period of many days he appeared to those who had gone with him from Galilee to Jerusalem. They are now his witnesses to the people of Israel.

“And now we are here to bring you this Good News. The promise was made to our ancestors, and God has now fulfilled it for us, their descendants, by raising Jesus.
_____

“Brothers, listen! We are here to proclaim that through this man Jesus there is forgiveness for your sins. Everyone who believes in him is made right in God’s sight—something the law of Moses could never do.
_____

As Paul and Barnabas left the synagogue that day, the people begged them to speak about these things again the next week. Many Jews and devout converts to Judaism followed Paul and Barnabas, and the two men urged them to continue to rely on the grace of God.

Paul Turns to the Gentiles

Acts 13:44-52 (NLT) – The following week almost the entire city turned out to hear them preach the word of the Lord. But when some of the Jews saw the crowds, they were jealous; so they slandered Paul and argued against whatever he said.

Then Paul and Barnabas spoke out boldly and declared, “It was necessary that we first preach the word of God to you Jews. But since you have rejected it and judged yourselves unworthy of eternal life, we will offer it to the Gentiles. For the Lord gave us this command when he said,

‘I have made you a light to the Gentiles, to bring salvation to the farthest corners of the earth.’”

When the Gentiles heard this, they were very glad and thanked the Lord for his message; and all who were chosen for eternal life became believers. So the Lord’s message spread throughout that region.

Then the Jews stirred up the influential religious women and the leaders of the city, and they incited a mob against Paul and Barnabas and ran them out of town. So they shook the dust from their feet as a sign of rejection and went to the town of Iconium. And the believers were filled with joy and with the Holy Spirit.

Preaching with Signs & Wonders  in Iconium

Acts 14:1-7 (NLT) – The same thing happened in Iconium. Paul and Barnabas went to the Jewish synagogue and preached with such power that a great number of both Jews and Greeks became believers. Some of the Jews, however, spurned God’s message and poisoned the minds of the Gentiles against Paul and Barnabas. But the apostles stayed there a long time, preaching boldly about the grace of the Lord. And the Lord proved their message was true by giving them power to do miraculous signs and wonders. But the people of the town were divided in their opinion about them. Some sided with the Jews, and some with the apostles.

Then a mob of Gentiles and Jews, along with their leaders, decided to attack and stone them. When the apostles learned of it, they fled to the region of Lycaonia—to the towns of Lystra and Derbe and the surrounding area. And there they preached the Good News.

Acts 14:8-20 (NLT) – While they were at Lystra, Paul and Barnabas came upon a man with crippled feet. He had been that way from birth, so he had never walked. He was sitting and listening as Paul preached. Looking straight at him, Paul realized he had faith to be healed. So Paul called to him in a loud voice, “Stand up!” And the man jumped to his feet and started walking.

When the crowd saw what Paul had done, they shouted in their local dialect, “These men are gods in human form!” They decided that Barnabas was the Greek god Zeus and that Paul was Hermes, since he was the chief speaker. Now the temple of Zeus was located just outside the town. So the priest of the temple and the crowd brought bulls and wreaths of flowers to the town gates, and they prepared to offer sacrifices to the apostles.

But when the apostles Barnabas and Paul heard what was happening, they tore their clothing in dismay and ran out among the people, shouting, “Friends, why are you doing this? We are merely human beings—just like you! We have come to bring you the Good News that you should turn from these worthless things and turn to the living God, who made heaven and earth, the sea, and everything in them. In the past he permitted all the nations to go their own ways, but he never left them without evidence of himself and his goodness. For instance, he sends you rain and good crops and gives you food and joyful hearts.” But even with these words, Paul and Barnabas could scarcely restrain the people from sacrificing to them.

Then some Jews arrived from Antioch and Iconium and won the crowds to their side. They stoned Paul and dragged him out of town, thinking he was dead. But as the believers gathered around him, he got up and went back into the town. The next day he left with Barnabas for Derbe.

Acts 14:21-27 (NLT) – After preaching the Good News in Derbe and making many disciples, Paul and Barnabas returned to Lystra, Iconium, and Antioch of Pisidia, where they strengthened the believers. They encouraged them to continue in the faith, reminding them that we must suffer many hardships to enter the Kingdom of God. Paul and Barnabas also appointed elders in every church. With prayer and fasting, they turned the elders over to the care of the Lord, in whom they had put their trust. Then they traveled back through Pisidia to Pamphylia. They preached the word in Perga, then went down to Attalia.

Finally, they returned by ship to Antioch of Syria, where their journey had begun. The believers there had entrusted them to the grace of God to do the work they had now completed. Upon arriving in Antioch, they called the church together and reported everything God had done through them and how he had opened the door of faith to the Gentiles, too. And they stayed there with the believers for a long time.
__________