The only one he’s representing is himself.

Two Heads are Better Than One

This is really just too much.

President Obama appeared on the David Letterman show last night (remember, though, that Obama just can’t spare the time to meet with Netanyahu). During the interview, our sanctimonious Über-leader made the following statement:

“One of the things I learned as president is you represent the entire country,” Obama said.

“If you want to be president, you have to work for everyone.”

“Obama the Unifier”. That’s him, all right. Let’s take a peek at some of his “Unifying” actions as President, shall we?

—PassesObamacare without a SINGLE Republican vote, AND when the polling numbers consistently were against it…

Peanut Gallery: Yesterday I watched the film – “Last Ounce of Courage.” I would describe it as a B Movie with an A+ message… it received a standing ovation from the dozen or so people at the early afternoon showing.

It’s the message that prompts me to ask you to pray for American believers: American believers have been, and are now, undergoing a “soft” – but systematic – persecution that has gradually eroded our First Amendment “free exercise of religion” rights.

“Christ has set us free to live a free life. So take your stand! Never again let anyone put a harness of slavery on you.” Galatians 5.1 MSG

Consider, for example, the Christmas celebrations and displays of 25-30 years ago – in schools, parks, market places, on TV and other public spaces – with those of today’s non-descript “Winter” Celebrations. We have become so brainwashed that a simple “Merry Christmas” in the grocery store feels like some major act of civil disobedience. What has happened to us?

The text of the First Amendment to the country’s Constitution states that “Congress shall make no law respecting an establishment of religion, or prohibiting the free exercise thereof; or abridging the freedom of speech, or of the press; or the right of the people peaceably to assemble, and to petition the Government for a redress of grievances.” It guarantees the free exercise of religion while also preventing the government from establishing a state religion. The Supreme Court has also interpreted this as preventing the government from having any authority in religion. 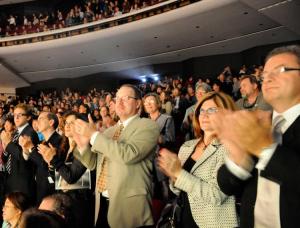 “Yet at the same time many even among the leaders believed in him. But because of the Pharisees they would not openly acknowledge their faith for fear they would be put out of the synagogue; for they loved human praise more than praise from God.” John 12.42-43 NIV