O God, our refuge and strength,
true source of all godliness:
Graciously hear the devout prayers of your Church,
and grant that those things which we ask faithfully,
we may obtain effectually;
through Jesus Christ our Lord,
who lives and reigns with you and the Holy Spirit,
one God, now and for ever. Amen.

32:3 Then Jacob sent messengers ahead to his brother, Esau, who was living in the region of Seir in the land of Edom. He told them, “Give this message to my master Esau: ‘Humble greetings from your servant Jacob. Until now I have been living with Uncle Laban, and now I own cattle, donkeys, flocks of sheep and goats, and many servants, both men and women. I have sent these messengers to inform my lord of my coming, hoping that you will be friendly to me.’”

After delivering the message, the messengers returned to Jacob and reported, “We met your brother, Esau, and he is already on his way to meet you—with an army of 400 men!” Jacob was terrified at the news. He divided his household, along with the flocks and herds and camels, into two groups. He thought, “If Esau meets one group and attacks it, perhaps the other group can escape.”

Then Jacob prayed, “O God of my grandfather Abraham, and God of my father, Isaac—O Lord, you told me, ‘Return to your own land and to your relatives.’ And you promised me, ‘I will treat you kindly.’ I am not worthy of all the unfailing love and faithfulness you have shown to me, your servant. When I left home and crossed the Jordan River, I owned nothing except a walking stick. Now my household fills two large camps! O Lord, please rescue me from the hand of my brother, Esau. I am afraid that he is coming to attack me, along with my wives and children. But you promised me, ‘I will surely treat you kindly, and I will multiply your descendants until they become as numerous as the sands along the seashore—too many to count.’”

Jacob stayed where he was for the night. Then he selected these gifts from his possessions to present to his brother, Esau: 200 female goats, 20 male goats, 200 ewes, 20 rams, 30 female camels with their young, 40 cows, 10 bulls, 20 female donkeys, and 10 male donkeys. He divided these animals into herds and assigned each to different servants. Then he told his servants, “Go ahead of me with the animals, but keep some distance between the herds.”

He gave these instructions to the men leading the first group: “When my brother, Esau, meets you, he will ask, ‘Whose servants are you? Where are you going? Who owns these animals?’ You must reply, ‘They belong to your servant Jacob, but they are a gift for his master Esau. Look, he is coming right behind us.’”

Jacob gave the same instructions to the second and third herdsmen and to all who followed behind the herds: “You must say the same thing to Esau when you meet him. And be sure to say, ‘Look, your servant Jacob is right behind us.’”

Jacob thought, “I will try to appease him by sending gifts ahead of me. When I see him in person, perhaps he will be friendly to me.” So the gifts were sent on ahead, while Jacob himself spent that night in the camp.

What Does the Lord Require of You

10:46 Then they reached Jericho, and as Jesus and his disciples left town, a large crowd followed him. A blind beggar named Bartimaeus (son of Timaeus) was sitting beside the road. When Bartimaeus heard that Jesus of Nazareth was nearby, he began to shout, “Jesus, Son of David, have mercy on me!”

“Be quiet!” many of the people yelled at him. 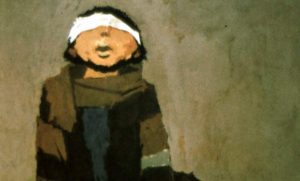 he only shouted louder, “Son of David, have mercy on me!”

When Jesus heard him, he stopped and said, “Tell him to come here.”

So they called the blind man. “Cheer up,” they said. “Come on, he’s calling you!” Bartimaeus threw aside his coat, jumped up, and came to Jesus.

“What do you want me to do for you?” Jesus asked.

And Jesus said to him, “Go, for your faith has healed you.” Instantly the man could see, and he followed Jesus down the road.

+ O Lord, have mercy upon us. Spare all those who confess their faults. Restore all those who are penitent, according to your promises declared to all people in Christ Jesus our Lord. And grant, O most merciful Father, for his sake, that we may now live a godly, righteous, and sober life, to the glory of your holy Name. Amen.

+ Grant to your faithful people, merciful Lord, pardon and peace; that we may be cleansed from all our sins, and serve you with a quiet mind; through Jesus Christ our Lord. Amen.

Bring to my sinfulness
the cleansing waters of your forgiveness,
that having washed,
I might know refreshment and release.