O God, our refuge and strength,
true source of all godliness:
Graciously hear the devout prayers of your Church,
and grant that those things which we ask faithfully,
we may obtain effectually;
through Jesus Christ our Lord,
who lives and reigns with you and the Holy Spirit,
one God, now and for ever. Amen.

“Pray in the Spirit
at all times and on every occasion.
Stay alert and be persistent in your prayers
for all believers everywhere.”
(Ephesians 6:18)

The Greed of Gehazi

5:20 But Gehazi, the servant of Elisha, the man of God, said to himself, “My master should not have let this Aramean get away without accepting any of his gifts. As surely as the Lord lives, I will chase after him and get something from him.” So Gehazi set off after Naaman.

When Naaman saw Gehazi running after him, he climbed down from his chariot and went to meet him. “Is everything all right?” Naaman asked.

“Yes,” Gehazi said, “but my master has sent me to tell you that two young prophets from the hill country of Ephraim have just arrived. He would like 75 pounds of silver and two sets of clothing to give to them.”

“By all means, take twice as much silver,” Naaman insisted. He gave him two sets of clothing, tied up the money in two bags, and sent two of his servants to carry the gifts for Gehazi. But when they arrived at the citadel, Gehazi took the gifts from the servants and sent the men back. Then he went and hid the gifts inside the house.

When he went in to his master, Elisha asked him, “Where have you been, Gehazi?”

“I haven’t been anywhere,” he replied.

But Elisha asked him, “Don’t you realize that I was there in spirit when Naaman stepped down from his chariot to meet you? Is this the time to receive money and clothing, olive groves and vineyards, sheep and cattle, and male and female servants? Because you have done this, you and your descendants will suffer from Naaman’s leprosy forever.” When Gehazi left the room, he was covered with leprosy; his skin was white as snow.

The Whole Armor of God

6:10 A final word: Be strong in the Lord and in his mighty power. Put on all of God’s armor so that you will be able to stand firm against all strategies of the devil. For we are not fighting against flesh-and-blood enemies, but against evil rulers and authorities of the unseen world, against mighty powers in this dark world, and against evil spirits in the heavenly places. 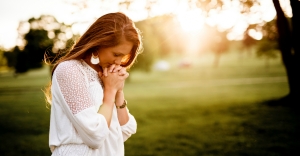 Therefore, put on every piece of God’s armor so you will be able to resist the enemy in the time of evil. Then after the battle you will still be standing firm. Stand your ground, putting on the belt of truth and the body armor of God’s righteousness. For shoes, put on the peace that comes from the Good News so that you will be fully prepared. In addition to all of these, hold up the shield of faith to stop the fiery arrows of the devil. Put on salvation as your helmet, and take the sword of the Spirit, which is the word of God.

Pray in the Spirit at all times and on every occasion. Stay alert and be persistent in your prayers for all believers everywhere.

And pray for me, too. Ask God to give me the right words so I can boldly explain God’s mysterious plan that the Good News is for Jews and Gentiles alike. I am in chains now, still preaching this message as God’s ambassador. So pray that I will keep on speaking boldly for him, as I should.

People Of The Cross by SELAH – Fred Howard

+ O God, you have made of one blood all the peoples of the earth, and sent your blessed Son to preach peace to those who are far off and to those who are near: Grant that people everywhere may seek after you and find you; bring the nations into your fold; pour out your Spirit upon all flesh; and hasten the coming of your kingdom; through Jesus Christ our Lord.

+ Merciful God, you desire not the death of sinners, but rather that they should turn to you and live; and through your only Son you have revealed yourself as the God who pardons iniquity. Have mercy on the unrepentant and those who do not believe. Awaken in them, by your Word and Holy Spirit, a deep sense of their sinfulness and peril.

Take from them all ignorance, hardness of heart, and contempt of your Word. Grant them to know and believe that there is no other Name under heaven given among men by which they must be saved, but only the Name of the Lord Jesus Christ.

And so bring them home and number them among your children, that they may be yours for ever; through Jesus Christ our Lord, who lives and reigns with you and the Holy Spirit, one God, world without end.

+ Almighty God our Savior, grant that our hearts may ache for a lost and broken world. May your Holy Spirit work through our words, deeds, and prayers, that the lost may be found and the dead made alive, and that all your redeemed may rejoice around your throne; through Jesus Christ our Lord. Amen.

Lord, be with us this day,
Within us to purify us;
Above us to draw us up;
Beneath us to sustain us;
Before us to lead us;
Behind us to restrain us;
Around us to protect us.