Let your merciful ears, O Lord,
be open to the prayers of your humble servants;
and, that we may receive what we ask,
teach us by your Holy Spirit to ask
only those things that are pleasing to you;
through Jesus Christ our Lord,
who with you and the same Spirit lives and reigns
for ever and ever. Amen.

“You are permitted to understand the secrets
of the Kingdom of God.
But I use parables to teach the others so that
the Scriptures might be fulfilled:
‘When they look, they won’t really see.
When they hear, they won’t understand.’
(Luke 8:10)

14:1 About this time war broke out in the region. King Amraphel of Babylonia, King Arioch of Ellasar, King Kedorlaomer of Elam, and King Tidal of Goiim fought against King Bera of Sodom, King Birsha of Gomorrah, King Shinab of Admah, King Shemeber of Zeboiim, and the king of Bela (also called Zoar).

This second group of kings joined forces in Siddim Valley (that is, the valley of the Dead Sea). For twelve years they had been subject to King Kedorlaomer, but in the thirteenth year they rebelled against him.

One year later Kedorlaomer and his allies arrived and defeated the Rephaites at Ashteroth-karnaim, the Zuzites at Ham, the Emites at Shaveh-kiriathaim, and the Horites at Mount Seir, as far as El-paran at the edge of the wilderness. Then they turned back and came to En-mishpat (now called Kadesh) and conquered all the territory of the Amalekites, and also the Amorites living in Hazazon-tamar.

Then the rebel kings of Sodom, Gomorrah, Admah, Zeboiim, and Bela (also called Zoar) prepared for battle in the valley of the Dead Sea. They fought against King Kedorlaomer of Elam, King Tidal of Goiim, King Amraphel of Babylonia, and King Arioch of Ellasar—four kings against five. As it happened, the valley of the Dead Sea was filled with tar pits. And as the army of the kings of Sodom and Gomorrah fled, some fell into the tar pits, while the rest escaped into the mountains. The victorious invaders then plundered Sodom and Gomorrah and headed for home, taking with them all the spoils of war and the food supplies. They also captured Lot—Abram’s nephew who lived in Sodom—and carried off everything he owned.

But one of Lot’s men escaped and reported everything to Abram the Hebrew, who was living near the oak grove belonging to Mamre the Amorite. Mamre and his relatives, Eshcol and Aner, were Abram’s allies.

When Abram heard that his nephew Lot had been captured, he mobilized the 318 trained men who had been born into his household. Then he pursued Kedorlaomer’s army until he caught up with them at Dan. There he divided his men and attacked during the night. Kedorlaomer’s army fled, but Abram chased them as far as Hobah, north of Damascus. Abram recovered all the goods that had been taken, and he brought back his nephew Lot with his possessions and all the women and other captives.

Fight For Us // Brittani Scott

Parable of the Farmer Scattering Seed 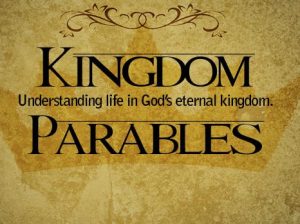 8:4 One day Jesus told a story in the form of a parable to a large crowd that had gathered from many towns to hear him: “A farmer went out to plant his seed. As he scattered it across his field, some seed fell on a footpath, where it was stepped on, and the birds ate it. Other seed fell among rocks. It began to grow, but the plant soon wilted and died for lack of moisture. Other seed fell among thorns that grew up with it and choked out the tender plants. Still other seed fell on fertile soil. This seed grew and produced a crop that was a hundred times as much as had been planted!” When he had said this, he called out, “Anyone with ears to hear should listen and understand.”

His disciples asked him what this parable meant. He replied, “You are permitted to understand the secrets of the Kingdom of God. But I use parables to teach the others so that the Scriptures might be fulfilled:

The Kindom of God – Taize

The kingdom of God is justice and peace
and joy in the Holy Spirit.
Come, Lord, and open in us
the gates of your kingdom.

+ Heavenly Father, you sent your Son among us to proclaim the kingdom of God in cities, towns, villages, and lonely places. Behold and visit us in the communities where we live. Renew the bonds of charity that uphold our civic life. Send us honest and able leaders. Deliver us from poverty, prejudice, and oppression, that peace may prevail with righteousness, and justice with mercy. And at the last, bring us to your Holy City, the new Jerusalem, where we shall know perfect unity and peace; through Jesus Christ our Lord. Amen.

May my life be… centered
less on self and more on You,
and through You to the world
in which I live and move.