Let your continual mercy, O Lord, cleanse and defend your
Church; and, because it cannot continue in safety without your
help, protect and govern it always by your goodness; through
Jesus Christ our Lord, who lives and reigns with you and the
Holy Spirit, one God, for ever and ever. Amen.

“These things I command you, so that you will love one another.
“If the world hates you,
know that it has hated me before it hated you.”
(John 15:17-18)

Since I Take Refuge In The LORD – Karl Kohlhase
[A prayer of confident trust when tempted with anxiety, fear, doubt, and worry.]

For the entrance to the inner sanctuary he made doors of olivewood; the lintel and the doorposts were five-sided. He covered the two doors of olivewood with carvings of cherubim, palm trees, and open flowers. He overlaid them with gold and spread gold on the cherubim and on the palm trees.

So also he made for the entrance to the nave doorposts of olivewood, in the form of a square, and two doors of cypress wood. The two leaves of the one door were folding, and the two leaves of the other door were folding. On them he carved cherubim and palm trees and open flowers, and he overlaid them with gold evenly applied on the carved work. He built the inner court with three courses of cut stone and one course of cedar beams.

In the fourth year the foundation of the house of the Lord was laid, in the month of Ziv. And in the eleventh year, in the month of Bul, which is the eighth month, the house was finished in all its parts, and according to all its specifications. He was seven years in building it.

Another in the Fire – Hillsong UNITED

15:16  You did not choose me, but I chose you and appointed you that you should go and bear fruit and that your fruit should abide, so that whatever you ask the Father in my name, he may give it to you. These things I command you, so that you will love one another.

The Hatred of the World 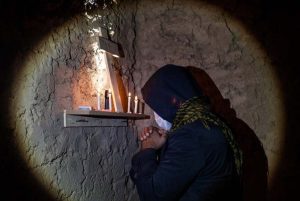 15:18  “If the world hates you, know that it has hated me before it hated you. If you were of the world, the world would love you as its own; but because you are not of the world, but I chose you out of the world, therefore the world hates you. Remember the word that I said to you: ‘A servant is not greater than his master.’ If they persecuted me, they will also persecute you. If they kept my word, they will also keep yours. But all these things they will do to you on account of my name, because they do not know him who sent me. If I had not come and spoken to them, they would not have been guilty of sin, but now they have no excuse for their sin. Whoever hates me hates my Father also. If I had not done among them the works that no one else did, they would not be guilty of sin, but now they have seen and hated both me and my Father. But the word that is written in their Law must be fulfilled: ‘They hated me without a cause.’

O God, Do Thou Sustain Me – Anabaptist Martyr Hymns

As Taliban forces have swallowed up Afghanistan and even now the capital city of Kabul, pastors in the country have been emailing and messaging me over the last few days, even hours, anxious for prayer.

Pastoring just a short flight away in the United Arab Emirates, I’ve had the opportunity to build partnerships with these men over the last decade. One house church leader sent me a picture of the small room he was hiding in with his family. He wrote, “This is where I am living. We are hidden right now in different areas.”

Another pastor wrote, “We can’t go out like normal. It’s dangerous. We moved to one of my friend’s houses, but it’s not safe at all.” Mindy Belz at WORLD reports that pastors say the Taliban has contacted them saying they are coming for them.

Here are specific ways they have asked for you and your church to pray.

I asked one brother if he was presently in physical danger. He replied, “Not only me but my family too…because of me.”

We need to pray that our sovereign God would physically protect our brothers and sisters in Afghanistan. Boldly go to the throne of the universe and plead with our God to restrain evil and confuse the plans of evildoers.

Pray also for physical provision. One brother asked that we would pray “for financial issues because no one can take out money from the bank and ATM’s are empty.”

A number have specifically asked that we would pray for visas to get out of the country. So let me throw in an additional request to you, dear reader: Is helping secure a visa something that you or someone you know are in a position to help with? If so, do what you can.

Whether you are or not, you do have access to the throne of the universe, and you can ask our heavenly Father to provide. Pray for physical protection and provision.

“Be not silent, O God of my praise! For wicked and deceitful mouths are opened against me, speaking against me with lying tongues. They encircle me with words of hate, and attack me without cause.” (Ps 109:1 – 2)

Every church leader who has emailed or texted me has asked that we would pray for the Lord to strengthen them in their faith—that they would “stay strong in the Lord, who is the Sovereign King,” as one put it.

“Pray for me to be strong in my faith. It is really hard to stay here,” said another.

If you are reading this, you have the opportunity to ask God to protect and even increase the faith of our brothers and sisters in the Afghan church. They don’t know what today—much less tomorrow—will bring. But they can be certain that our God will supply every need of theirs according to his riches in glory in Christ Jesus (Phil 4:19).

“May the God of hope fill you with all joy and peace in believing, so that by the power of the Holy Spirit you may abound in hope.” (Rom 15:13)

“May you be strengthened with all power, according to his glorious might…” (Col 1:11a)

One brother described these days as “dark” and said they feel like a “storm.” Then he asked that we pray for “revival.” What faith! Here is a man whose life is in danger asking us, who enjoy so many privileges and freedoms, to pray that God would open the eyes of the spiritually blind and give life to dead hearts.

Wouldn’t it be like our God to work in these horrible circumstances to make his great name known? While our Afghan brothers and sisters face terrible uncertainty, we should be like the believers in Acts 12 who themselves faced serious threats and persecution but, without ceasing, offered up earnest prayers to God.

“Finally, brothers, pray for us, that the word of the Lord may speed ahead and be honored, as happened among you, and that we may be delivered from wicked and evil men.” (2 Thes 3:1-2)

“Our Hope Is Not in Politics, but in Jesus”

Over the past weeks, U. S. missions agencies have pulled out their workers. I have had the great privilege to minister the Word to some of them as they have processed their own grief and confusion. I’m grateful they could get out. Pray for them as well as for any who chose to stay.

But pray especially for the Afghans who have no choice but to stay, such as one brother who has already spent time imprisoned for his faith in Afghanistan. He has assured me again and again, “We can trust that our Lord is mighty and will care for his children.” And: “Our hope is not in politics but in Jesus who is the King.”

This is not escapism. This is biblical faith when all earthly prospects are completely bleak. Don’t you know that such faith brings great glory and joy to our Father in heaven?

While these days are dark and tragic, remember that God sits on his throne in the heavens. He holds the rulers of this world in derision. He promises to make the nations his Son’s heritage, the ends of the earth his possession (Psalm 2:4, 8).

+ Hasten, O Father, the coming of your kingdom; and grant that we your servants, who now live by faith, may with joy behold your Son at his coming in glorious majesty; even Jesus Christ, our only Mediator and Advocate. Amen.