Almighty and merciful God, it is only by your grace that your
faithful people offer you true and laudable service: Grant that we
may run without stumbling to obtain your heavenly promises;
through Jesus Christ our Lord, who lives and reigns with you
and the Holy Spirit, one God, now and for ever. Amen.

” Absalom hated Amnon,
because he had violated his sister Tamar….
Absalom commanded his servants,
“Mark when Amnon’s heart is merry with wine,
and when I say to you, ‘Strike Amnon,’
then kill him. ”
(2 Samuel 13:22,28)

50:16  But to the wicked God says:
“What right have you to recite my statutes
or take my covenant on your lips?
17 For you hate discipline,
and you cast my words behind you.
18 If you see a thief, you are pleased with him,
and you keep company with adulterers.

19 “You give your mouth free rein for evil,
and your tongue frames deceit.
20 You sit and speak against your brother;
you slander your own mother’s son.
21 These things you have done, and I have been silent;
you thought that I was one like yourself.
But now I rebuke you and lay the charge before you.

22 “Mark this, then, you who forget God,
lest I tear you apart, and there be none to deliver!
23 The one who offers thanksgiving as his sacrifice glorifies me;
to one who orders his way rightly
I will show the salvation of God!”

13:20  And her brother Absalom said to her, “Has Amnon your brother been with you? Now hold your peace, my sister. He is your brother; do not take this to heart.” So Tamar lived, a desolate woman, in her brother Absalom’s house. When King David heard of all these things, he was very angry. But Absalom spoke to Amnon neither good nor bad, for Absalom hated Amnon, because he had violated his sister Tamar.

13:23  After two full years Absalom had sheepshearers at Baal-hazor, which is near Ephraim, and Absalom invited all the king’s sons. And Absalom came to the king and said, “Behold, your servant has sheepshearers. Please let the king and his servants go with your servant.” But the king said to Absalom, “No, my son, let us not all go, lest we be burdensome to you.” He pressed him, but he would not go but gave him his blessing. Then Absalom said, “If not, please let my brother Amnon go with us.” And the king said to him, “Why should he go with you?” But Absalom pressed him until he let Amnon and all the king’s sons go with him. 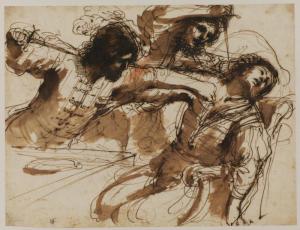 Then Absalom commanded his servants, “Mark when Amnon’s heart is merry with wine, and when I say to you, ‘Strike Amnon,’ then kill him. Do not fear; have I not commanded you? Be courageous and be valiant.” So the servants of Absalom did to Amnon as Absalom had commanded. Then all the king’s sons arose, and each mounted his mule and fled.

While they were on the way, news came to David, “Absalom has struck down all the king’s sons, and not one of them is left.” Then the king arose and tore his garments and lay on the earth. And all his servants who were standing by tore their garments. But Jonadab the son of Shimeah, David’s brother, said, “Let not my lord suppose that they have killed all the young men, the king’s sons, for Amnon alone is dead. For by the command of Absalom this has been determined from the day he violated his sister Tamar. Now therefore let not my lord the king so take it to heart as to suppose that all the king’s sons are dead, for Amnon alone is dead.”

12:34  But Absalom fled. And the young man who kept the watch lifted up his eyes and looked, and behold, many people were coming from the road behind him by the side of the mountain. And Jonadab said to the king, “Behold, the king’s sons have come; as your servant said, so it has come about.” And as soon as he had finished speaking, behold, the king’s sons came and lifted up their voice and wept. And the king also and all his servants wept very bitterly.

8:1  In those days, when again a great crowd had gathered, and they had nothing to eat, he called his disciples to him and said to them, “I have compassion on the crowd, because they have been with me now three days and have nothing to eat. And if I send them away hungry to their homes, they will faint on the way. And some of them have come from far away.” And his disciples answered him, “How can one feed these people with bread here in this desolate place?”  And he asked them, “How many loaves do you have?” They said, “Seven.” And he directed the crowd to sit down on the ground. And he took the seven loaves, and having given thanks, he broke them and gave them to his disciples to set before the people; and they set them before the crowd. And they had a few small fish. And having blessed them, he said that these also should be set before them. And they ate and were satisfied. And they took up the broken pieces left over, seven baskets full. And there were about four thousand people. And he sent them away. And immediately he got into the boat with his disciples and went to the district of Dalmanutha.

+ Eternal God, in whose perfect kingdom no sword is drawn but the sword of righteousness, no strength known but the strength of love: So mightily spread abroad your Spirit, that all peoples may be gathered under the banner of the Prince of Peace; to whom be dominion and glory, now and for ever. Amen.

+ Almighty and eternal God, so draw our hearts to you, so guide our minds, so fill our imaginations, so control our wills, that we may be wholly yours, utterly dedicated to you; and then use us, we pray, as you will, and always to your glory and the welfare of your people; through our Lord and Savior Jesus Christ. Amen.