O Lord, from whom all good proceeds: Grant us the inspiration of your Holy Spirit, that we may always think those things that are good, and by your merciful guidance may accomplish the same; through Jesus Christ our Lord, who lives and reigns with you and the Holy Spirit, one God, for ever and ever. Amen.

“Look, I will come as unexpectedly as a thief! Blessed are all who are watching for me,
who keep their clothing ready so they will not have to walk around naked and ashamed.”

The Song of Moses and of the Lamb

15 Then I saw in heaven another marvelous event of great significance. Seven angels were holding the seven last plagues, which would bring God’s wrath to completion. I saw before me what seemed to be a glass sea mixed with fire. And on it stood all the people who had been victorious over the beast and his statue and the number representing his name. They were all holding harps that God had given them. And they were singing the song of Moses, the servant of God, and the song of the Lamb:

“Great and marvelous are your works,
O Lord God, the Almighty.
Just and true are your ways,
O King of the nations.

Who will not fear you, Lord,
and glorify your name?
For you alone are holy.
All nations will come and worship before you,
for your righteous deeds have been revealed.”
__________

The Seven Bowls of the Seven Plagues

16 Then I heard a mighty voice from the Temple say to the seven angels, “Go your ways and pour out on the earth the seven bowls containing God’s wrath.”

So the first angel left the Temple and poured out his bowl on the earth, and horrible, malignant sores broke out on everyone who had the mark of the beast and who worshiped his statue.

Then the second angel poured out his bowl on the sea, and it became like the blood of a corpse. And everything in the sea died.

Then the third angel poured out his bowl on the rivers and springs, and they became blood. And I heard the angel who had authority over all water saying,

“You are just, O Holy One, who is and who always was,
because you have sent these judgments.

Since they shed the blood
of your holy people and your prophets,
you have given them blood to drink.
It is their just reward.”

And I heard a voice from the altar, saying,

“Yes, O Lord God, the Almighty,
your judgments are true and just.”

Then the fourth angel poured out his bowl on the sun, causing it to scorch everyone with its fire. Everyone was burned by this blast of heat, and they cursed the name of God, who had control over all these plagues. They did not repent of their sins and turn to God and give him glory.

Then the fifth angel poured out his bowl on the throne of the beast, and his kingdom was plunged into darkness. His subjects ground their teeth in anguish, and they cursed the God of heaven for their pains and sores. But they did not repent of their evil deeds and turn to God. 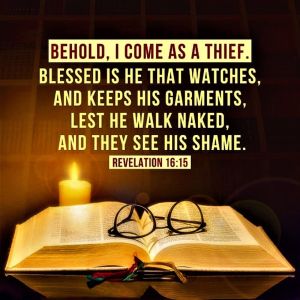 Then the sixth angel poured out his bowl on the great Euphrates River, and it dried up so that the kings from the east could march their armies toward the west without hindrance. And I saw three evil spirits that looked like frogs leap from the mouths of the dragon, the beast, and the false prophet. They are demonic spirits who work miracles and go out to all the rulers of the world to gather them for battle against the Lord on that great judgment day of God the Almighty.

“Look, I will come as unexpectedly as a thief! Blessed are all who are watching for me, who keep their clothing ready so they will not have to walk around naked and ashamed.”

And the demonic spirits gathered all the rulers and their armies to a place with the Hebrew name Armageddon.
__________

Then the seventh angel poured out his bowl into the air. And a mighty shout came from the throne in the Temple, saying, “It is finished!” Then the thunder crashed and rolled, and lightning flashed. And a great earthquake struck—the worst since people were placed on the earth. The great city of Babylon split into three sections, and the cities of many nations fell into heaps of rubble. So God remembered all of Babylon’s sins, and he made her drink the cup that was filled with the wine of his fierce wrath. And every island disappeared, and all the mountains were leveled. There was a terrible hailstorm, and hailstones weighing as much as seventy-five pounds fell from the sky onto the people below. They cursed God because of the terrible plague of the hailstorm.

17 One of the seven angels who had poured out the seven bowls came over and spoke to me. “Come with me,” he said, “and I will show you the judgment that is going to come on the great prostitute, who rules over many waters. The kings of the world have committed adultery with her, and the people who belong to this world have been made drunk by the wine of her immorality.”

So the angel took me in the Spirit into the wilderness. There I saw a woman sitting on a scarlet beast that had seven heads and ten horns, and blasphemies against God were written all over it. The woman wore purple and scarlet clothing and beautiful jewelry made of gold and precious gems and pearls. In her hand she held a gold goblet full of obscenities and the impurities of her immorality. A mysterious name was written on her forehead: “Babylon the Great, Mother of All Prostitutes and Obscenities in the World.” I could see that she was drunk—drunk with the blood of God’s holy people who were witnesses for Jesus. I stared at her in complete amazement.

“Why are you so amazed?” the angel asked. “I will tell you the mystery of this woman and of the beast with seven heads and ten horns on which she sits. The beast you saw was once alive but isn’t now. And yet he will soon come up out of the bottomless pit and go to eternal destruction. And the people who belong to this world, whose names were not written in the Book of Life before the world was made, will be amazed at the reappearance of this beast who had died.

“This calls for a mind with understanding: The seven heads of the beast represent the seven hills where the woman rules. They also represent seven kings. Five kings have already fallen, the sixth now reigns, and the seventh is yet to come, but his reign will be brief.

“The scarlet beast that was, but is no longer, is the eighth king. He is like the other seven, and he, too, is headed for destruction. The ten horns of the beast are ten kings who have not yet risen to power. They will be appointed to their kingdoms for one brief moment to reign with the beast. They will all agree to give him their power and authority. Together they will go to war against the Lamb, but the Lamb will defeat them because he is Lord of all lords and King of all kings. And his called and chosen and faithful ones will be with him.”

Then the angel said to me, “The waters where the prostitute is ruling represent masses of people of every nation and language. The scarlet beast and his ten horns all hate the prostitute. They will strip her naked, eat her flesh, and burn her remains with fire. For God has put a plan into their minds, a plan that will carry out his purposes. They will agree to give their authority to the scarlet beast, and so the words of God will be fulfilled. And this woman you saw in your vision represents the great city that rules over the kings of the world.”
__________

Praise the Lord! Yes, really praise him! I will praise him as long as I live, yes, even with my dying breath.

Don’t look to men for help; their greatest leaders fail; for every man must die. His breathing stops, life ends, and in a moment all he planned for himself is ended.

But happy is the man who has the God of Jacob as his helper, whose hope is in the Lord his God— the God who made both earth and heaven, the seas and everything in them.

He is the God who keeps every promise, who gives justice to the poor and oppressed and food to the hungry. He frees the prisoners and opens the eyes of the blind; he lifts the burdens from those bent down beneath their loads.

For the Lord loves good men. He protects the immigrants and cares for the orphans and widows. But he turns topsy-turvy the plans of the wicked.

The Lord will reign forever. O Jerusalem, your God is King in every generation! Hallelujah! Praise the Lord!
__________

“You are just, O Holy One, who is and who always was,
because you have sent these judgments.

“Yes, O Lord God, the Almighty,
your judgments are true and just.”

Tags: "Judgements from the Holy One who is just and true.", 20 Jun 2020, Anglican Church in North America, jesus, Psalm 145, Revelation 15-17, Saturday of the 11th Week in Ordinary Time, the great prostitute, The Seven Bowls of the Seven Plagues, The Song of Moses and of the Lamb, Universaalis Morning Prayer, USCCB Daily Readings