Parable of the Lost Sheep

Luke 15 (NLT) – Tax collectors and other notorious sinners often came to listen to Jesus teach. This made the Pharisees and teachers of religious law complain that he was associating with such sinful people—even eating with them!

So Jesus told them this story: “If a man has a hundred sheep and one of them gets lost, what will he do? Won’t he leave the ninety-nine others in the wilderness and go to search for the one that is lost until he finds it? And when he has found it, he will joyfully carry it home on his shoulders. When he arrives, he will call together his friends and neighbors, saying, ‘Rejoice with me because I have found my lost sheep.’ In the same way, there is more joy in heaven over one lost sinner who repents and returns to God than over ninety-nine others who are righteous and haven’t strayed away!

Parable of the Lost Coin 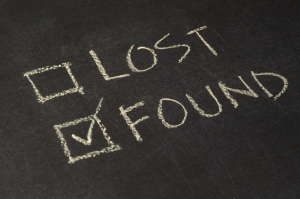 “Or suppose a woman has ten silver coins and loses one. Won’t she light a lamp and sweep the entire house and search carefully until she finds it? And when she finds it, she will call in her friends and neighbors and say, ‘Rejoice with me because I have found my lost coin.’ In the same way, there is joy in the presence of God’s angels when even one sinner repents.”

Parable of the Lost Son

To illustrate the point further, Jesus told them this story: “A man had two sons. The younger son told his father, ‘I want my share of your estate now before you die.’ So his father agreed to divide his wealth between his sons.

“A few days later this younger son packed all his belongings and moved to a distant land, and there he wasted all his money in wild living. About the time his money ran out, a great famine swept over the land, and he began to starve. He persuaded a local farmer to hire him, and the man sent him into his fields to feed the pigs. The young man became so hungry that even the pods he was feeding the pigs looked good to him. But no one gave him anything.

“When he finally came to his senses, he said to himself, ‘At home even the hired servants have food enough to spare, and here I am dying of hunger! I will go home to my father and say, “Father, I have sinned against both heaven and you, and I am no longer worthy of being called your son. Please take me on as a hired servant.”’

“So he returned home to his father. And while he was still a long way off, his father saw him coming. Filled with love and compassion, he ran to his son, embraced him, and kissed him. His son said to him, ‘Father, I have sinned against both heaven and you, and I am no longer worthy of being called your son.’

“But his father said to the servants, ‘Quick! Bring the finest robe in the house and put it on him. Get a ring for his finger and sandals for his feet. And kill the calf we have been fattening. We must celebrate with a feast, for this son of mine was dead and has now returned to life. He was lost, but now he is found.’ So the party began.

“Meanwhile, the older son was in the fields working. When he returned home, he heard music and dancing in the house, and he asked one of the servants what was going on. ‘Your brother is back,’ he was told, ‘and your father has killed the fattened calf. We are celebrating because of his safe return.’

“The older brother was angry and wouldn’t go in. His father came out and begged him, but he replied, ‘All these years I’ve slaved for you and never once refused to do a single thing you told me to. And in all that time you never gave me even one young goat for a feast with my friends. Yet when this son of yours comes back after squandering your money on prostitutes, you celebrate by killing the fattened calf!’

“His father said to him, ‘Look, dear son, you have always stayed by me, and everything I have is yours. We had to celebrate this happy day. For your brother was dead and has come back to life! He was lost, but now he is found!’”

Parable of the Shrewd Manager

Luke 16 (NLT) – Jesus told this story to his disciples: “There was a certain rich man who had a manager handling his affairs. One day a report came that the manager was wasting his employer’s money. So the employer called him in and said, ‘What’s this I hear about you? Get your report in order, because you are going to be fired.’

“The manager thought to himself, ‘Now what? My boss has fired me. I don’t have the strength to dig ditches, and I’m too proud to beg. Ah, I know how to ensure that I’ll have plenty of friends who will give me a home when I am fired.’

“So he invited each person who owed money to his employer to come and discuss the situation. He asked the first one, ‘How much do you owe him?’ The man replied, ‘I owe him 800 gallons of olive oil.’ So the manager told him, ‘Take the bill and quickly change it to 400 gallons.’

“The rich man had to admire the dishonest rascal for being so shrewd. And it is true that the children of this world are more shrewd in dealing with the world around them than are the children of the light. Here’s the lesson: Use your worldly resources to benefit others and make friends. Then, when your possessions are gone, they will welcome you to an eternal home.

“No one can serve two masters. For you will hate one and love the other; you will be devoted to one and despise the other. You cannot serve God and be enslaved to money.”

The Pharisees, who dearly loved their money, heard all this and scoffed at him. Then he said to them, “You like to appear righteous in public, but God knows your hearts. What this world honors is detestable in the sight of God.

“Until John the Baptist, the law of Moses and the messages of the prophets were your guides. But now the Good News of the Kingdom of God is preached, and everyone is eager to get in. But that doesn’t mean that the law has lost its force. It is easier for heaven and earth to disappear than for the smallest point of God’s law to be overturned.

Parable of the Rich Man and Lazarus

Jesus said, “There was a certain rich man who was splendidly clothed in purple and fine linen and who lived each day in luxury. At his gate lay a poor man named Lazarus who was covered with sores. As Lazarus lay there longing for scraps from the rich man’s table, the dogs would come and lick his open sores.

“Finally, the poor man died and was carried by the angels to sit beside Abraham at the heavenly banquet. The rich man also died and was buried, and he went to the place of the dead. There, in torment, he saw Abraham in the far distance with Lazarus at his side.

“The rich man shouted, ‘Father Abraham, have some pity! Send Lazarus over here to dip the tip of his finger in water and cool my tongue. I am in anguish in these flames.’

“But Abraham said to him, ‘Son, remember that during your lifetime you had everything you wanted, and Lazarus had nothing. So now he is here being comforted, and you are in anguish. And besides, there is a great chasm separating us. No one can cross over to you from here, and no one can cross over to us from there.’

“Then the rich man said, ‘Please, Father Abraham, at least send him to my father’s home. For I have five brothers, and I want him to warn them so they don’t end up in this place of torment.’

“But Abraham said, ‘Moses and the prophets have warned them. Your brothers can read what they wrote.’

“The rich man replied, ‘No, Father Abraham! But if someone is sent to them from the dead, then they will repent of their sins and turn to God.’

“But Abraham said, ‘If they won’t listen to Moses and the prophets, they won’t be persuaded even if someone rises from the dead.’”
__________

“The Lost Get Found” – Britt Nicole