Acts 25 (NLT) – Three days after Festus arrived in Caesarea to take over his new responsibilities, he left for Jerusalem, where the leading priests and other Jewish leaders met with him and made their accusations against Paul. They asked Festus as a favor to transfer Paul to Jerusalem (planning to ambush and kill him on the way). But Festus replied that Paul was at Caesarea and he himself would be returning there soon. So he said, “Those of you in authority can return with me. If Paul has done anything wrong, you can make your accusations.”

About eight or ten days later Festus returned to Caesarea, and on the following day he took his seat in court and ordered that Paul be brought in. When Paul arrived, the Jewish leaders from Jerusalem gathered around and made many serious accusations they couldn’t prove.

Paul denied the charges. “I am not guilty of any crime against the Jewish laws or the Temple or the Roman government,” he said.

Then Festus, wanting to please the Jews, asked him, “Are you willing to go to Jerusalem and stand trial before me there?”

But Paul replied, “No! This is the official Roman court, so I ought to be tried right here. You know very well I am not guilty of harming the Jews. If I have done something worthy of death, I don’t refuse to die. But if I am innocent, no one has a right to turn me over to these men to kill me. I appeal to Caesar!”

Festus conferred with his advisers and then replied, “Very well! You have appealed to Caesar, and to Caesar you will go!”

A few days later King Agrippa arrived with his sister, Bernice, to pay their respects to Festus. During their stay of several days, Festus discussed Paul’s case with the king. “There is a prisoner here,” he told him, “whose case was left for me by Felix. When I was in Jerusalem, the leading priests and Jewish elders pressed charges against him and asked me to condemn him. I pointed out to them that Roman law does not convict people without a trial. They must be given an opportunity to confront their accusers and defend themselves.

“When his accusers came here for the trial, I didn’t delay. I called the case the very next day and ordered Paul brought in. But the accusations made against him weren’t any of the crimes I expected. Instead, it was something about their religion and a dead man named Jesus, who Paul insists is alive. I was at a loss to know how to investigate these things, so I asked him whether he would be willing to stand trial on these charges in Jerusalem. But Paul appealed to have his case decided by the emperor. So I ordered that he be held in custody until I could arrange to send him to Caesar.”

“I’d like to hear the man myself,” Agrippa said.

And Festus replied, “You will—tomorrow!”

So the next day Agrippa and Bernice arrived at the auditorium with great pomp, accompanied by military officers and prominent men of the city. Festus ordered that Paul be brought in. Then Festus said, “King Agrippa and all who are here, this is the man whose death is demanded by all the Jews, both here and in Jerusalem. But in my opinion he has done nothing deserving death. However, since he appealed his case to the emperor, I have decided to send him to Rome.

“But what shall I write the emperor? For there is no clear charge against him. So I have brought him before all of you, and especially you, King Agrippa, so that after we examine him, I might have something to write. For it makes no sense to send a prisoner to the emperor without specifying the charges against him!” 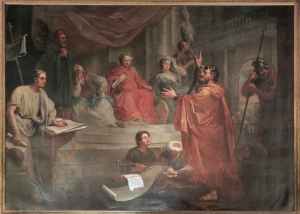 So Paul, gesturing with his hand, started his defense: “I am fortunate, King Agrippa, that you are the one hearing my defense today against all these accusations made by the Jewish leaders, for I know you are an expert on all Jewish customs and controversies. Now please listen to me patiently!

“As the Jewish leaders are well aware, I was given a thorough Jewish training from my earliest childhood among my own people and in Jerusalem. If they would admit it, they know that I have been a member of the Pharisees, the strictest sect of our religion. Now I am on trial because of my hope in the fulfillment of God’s promise made to our ancestors. In fact, that is why the twelve tribes of Israel zealously worship God night and day, and they share the same hope I have. Yet, Your Majesty, they accuse me for having this hope! Why does it seem incredible to any of you that God can raise the dead?

“I used to believe that I ought to do everything I could to oppose the very name of Jesus the Nazarene. Indeed, I did just that in Jerusalem. Authorized by the leading priests, I caused many believers there to be sent to prison. And I cast my vote against them when they were condemned to death. Many times I had them punished in the synagogues to get them to curse Jesus. I was so violently opposed to them that I even chased them down in foreign cities.

“One day I was on such a mission to Damascus, armed with the authority and commission of the leading priests. About noon, Your Majesty, as I was on the road, a light from heaven brighter than the sun shone down on me and my companions. We all fell down, and I heard a voice saying to me in Aramaic, ‘Saul, Saul, why are you persecuting me? It is useless for you to fight against my will.’

“And the Lord replied, ‘I am Jesus, the one you are persecuting. Now get to your feet! For I have appeared to you to appoint you as my servant and witness. Tell people that you have seen me, and tell them what I will show you in the future. And I will rescue you from both your own people and the Gentiles. Yes, I am sending you to the Gentiles to open their eyes, so they may turn from darkness to light and from the power of Satan to God. Then they will receive forgiveness for their sins and be given a place among God’s people, who are set apart by faith in me.’ 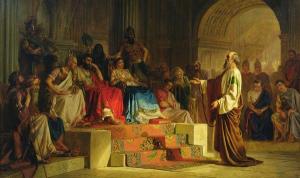 “And so, King Agrippa, I obeyed that vision from heaven. I preached first to those in Damascus, then in Jerusalem and throughout all Judea, and also to the Gentiles, that all must repent of their sins and turn to God—and prove they have changed by the good things they do. Some Jews arrested me in the Temple for preaching this, and they tried to kill me. But God has protected me right up to this present time so I can testify to everyone, from the least to the greatest. I teach nothing except what the prophets and Moses said would happen— that the Messiah would suffer and be the first to rise from the dead, and in this way announce God’s light to Jews and Gentiles alike.”

Suddenly, Festus shouted, “Paul, you are insane. Too much study has made you crazy!”

But Paul replied, “I am not insane, Most Excellent Festus. What I am saying is the sober truth. And King Agrippa knows about these things. I speak boldly, for I am sure these events are all familiar to him, for they were not done in a corner! King Agrippa, do you believe the prophets? I know you do—”

Agrippa interrupted him. “Do you think you can persuade me to become a Christian so quickly?”

Paul replied, “Whether quickly or not, I pray to God that both you and everyone here in this audience might become the same as I am, except for these chains.”

Then the king, the governor, Bernice, and all the others stood and left. As they went out, they talked it over and agreed, “This man hasn’t done anything to deserve death or imprisonment.”

“Comfort, Comfort, O My People” – by The Ignatian Schola