Opening (A Collect for Grace – Wednesday)

O Lord, our heavenly Father, almighty and everlasting God, you have brought us safely to the beginning of this day: Defend us by your mighty power, that we may not fall into sin nor run into any danger; and that guided by your Spirit, we may do what is righteous in your sight; through Jesus Christ our Lord. Amen.
__________

The Birth of Jesus

At that time the Roman emperor, Augustus, decreed that a census should be taken throughout the Roman Empire. (This was the first census taken when Quirinius was governor of Syria.) All returned to their own ancestral towns to register for this census. And because Joseph was a descendant of King David, he had to go to Bethlehem in Judea, David’s ancient home. He traveled there from the village of Nazareth in Galilee. He took with him Mary, to whom he was engaged, who was now expecting a child.

And while they were there, the time came for her baby to be born. She gave birth to her firstborn son. She wrapped him snugly in strips of cloth and laid him in a manger, because there was no lodging available for them.

The Shepherds and Angels 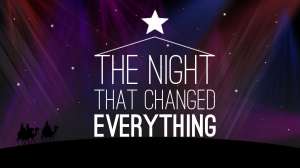 That night there were shepherds staying in the fields nearby, guarding their flocks of sheep. Suddenly, an angel of the Lord appeared among them, and the radiance of the Lord’s glory surrounded them. They were terrified, but the angel reassured them. “Don’t be afraid!” he said. “I bring you good news that will bring great joy to all people. The Savior—yes, the Messiah, the Lord—has been born today in Bethlehem, the city of David! And you will recognize him by this sign: You will find a baby wrapped snugly in strips of cloth, lying in a manger.”

Suddenly, the angel was joined by a vast host of others—the armies of heaven—praising God and saying,

“Glory to God in highest heaven,
and peace on earth to those with whom God is pleased.”

When the angels had returned to heaven, the shepherds said to each other, “Let’s go to Bethlehem! Let’s see this thing that has happened, which the Lord has told us about.”

They hurried to the village and found Mary and Joseph. And there was the baby, lying in the manger. After seeing him, the shepherds told everyone what had happened and what the angel had said to them about this child. All who heard the shepherds’ story were astonished, but Mary kept all these things in her heart and thought about them often. The shepherds went back to their flocks, glorifying and praising God for all they had heard and seen. It was just as the angel had told them.

Jesus Is Presented in the Temple

Eight days later, when the baby was circumcised, he was named Jesus, the name given him by the angel even before he was conceived.

Then it was time for their purification offering, as required by the law of Moses after the birth of a child; so his parents took him to Jerusalem to present him to the Lord. The law of the Lord says, “If a woman’s first child is a boy, he must be dedicated to the Lord.” So they offered the sacrifice required in the law of the Lord—“either a pair of turtledoves or two young pigeons.”

The Prophecy of Simeon

At that time there was a man in Jerusalem named Simeon. He was righteous and devout and was eagerly waiting for the Messiah to come and rescue Israel. The Holy Spirit was upon him and had revealed to him that he would not die until he had seen the Lord’s Messiah. That day the Spirit led him to the Temple. So when Mary and Joseph came to present the baby Jesus to the Lord as the law required, Simeon was there. He took the child in his arms and praised God, saying,

“Sovereign Lord, now let your servant die in peace,
as you have promised. I have seen your salvation,
which you have prepared for all people.
He is a light to reveal God to the nations,
and he is the glory of your people Israel!”

Jesus’ parents were amazed at what was being said about him. Then Simeon blessed them, and he said to Mary, the baby’s mother, “This child is destined to cause many in Israel to fall, and many others to rise. He has been sent as a sign from God, but many will oppose him. As a result, the deepest thoughts of many hearts will be revealed. And a sword will pierce your very soul.”

The Prophecy of Anna

Anna, a prophet, was also there in the Temple. She was the daughter of Phanuel from the tribe of Asher, and she was very old. Her husband died when they had been married only seven years. Then she lived as a widow to the age of eighty-four. She never left the Temple but stayed there day and night, worshiping God with fasting and prayer. She came along just as Simeon was talking with Mary and Joseph, and she began praising God. She talked about the child to everyone who had been waiting expectantly for God to rescue Jerusalem.

When Jesus’ parents had fulfilled all the requirements of the law of the Lord, they returned home to Nazareth in Galilee. There the child grew up healthy and strong. He was filled with wisdom, and God’s favor was on him.

Jesus Speaks with the Teachers

Every year Jesus’ parents went to Jerusalem for the Passover festival. When Jesus was twelve years old, they attended the festival as usual. After the celebration was over, they started home to Nazareth, but Jesus stayed behind in Jerusalem. His parents didn’t miss him at first, because they assumed he was among the other travelers. But when he didn’t show up that evening, they started looking for him among their relatives and friends.

When they couldn’t find him, they went back to Jerusalem to search for him there. Three days later they finally discovered him in the Temple, sitting among the religious teachers, listening to them and asking questions. All who heard him were amazed at his understanding and his answers.

His parents didn’t know what to think. “Son,” his mother said to him, “why have you done this to us? Your father and I have been frantic, searching for you everywhere.”

“But why did you need to search?” he asked. “Didn’t you know that I must be in my Father’s house?” But they didn’t understand what he meant.

Then he returned to Nazareth with them and was obedient to them. And his mother stored all these things in her heart.

Jesus grew in wisdom and in stature and in favor with God and all the people.

John the Baptist Prepares the Way

It was now the fifteenth year of the reign of Tiberius, the Roman emperor. Pontius Pilate was governor over Judea; Herod Antipas was ruler over Galilee; his brother Philip was ruler over Iturea and Traconitis; Lysanias was ruler over Abilene. Annas and Caiaphas were the high priests. At this time a message from God came to John son of Zechariah, who was living in the wilderness. Then John went from place to place on both sides of the Jordan River, preaching that people should be baptized to show that they had repented of their sins and turned to God to be forgiven. Isaiah had spoken of John when he said,

“He is a voice shouting in the wilderness,
‘Prepare the way for the Lord’s coming!
Clear the road for him!

The valleys will be filled,
and the mountains and hills made level.
The curves will be straightened,
and the rough places made smooth.

And then all people will see
the salvation sent from God.’”

When the crowds came to John for baptism, he said, “You brood of snakes! Who warned you to flee the coming wrath? Prove by the way you live that you have repented of your sins and turned to God. Don’t just say to each other, ‘We’re safe, for we are descendants of Abraham.’ That means nothing, for I tell you, God can create children of Abraham from these very stones. Even now the ax of God’s judgment is poised, ready to sever the roots of the trees. Yes, every tree that does not produce good fruit will be chopped down and thrown into the fire.”

The crowds asked, “What should we do?”

John replied, “If you have two shirts, give one to the poor. If you have food, share it with those who are hungry.”

Even corrupt tax collectors came to be baptized and asked, “Teacher, what should we do?”

He replied, “Collect no more taxes than the government requires.”

“What should we do?” asked some soldiers.

John replied, “Don’t extort money or make false accusations. And be content with your pay.”

Everyone was expecting the Messiah to come soon, and they were eager to know whether John might be the Messiah. John answered their questions by saying, “I baptize you with water; but someone is coming soon who is greater than I am—so much greater that I’m not even worthy to be his slave and untie the straps of his sandals. He will baptize you with the Holy Spirit and with fire. He is ready to separate the chaff from the wheat with his winnowing fork. Then he will clean up the threshing area, gathering the wheat into his barn but burning the chaff with never-ending fire.” John used many such warnings as he announced the Good News to the people.

John also publicly criticized Herod Antipas, the ruler of Galilee, for marrying Herodias, his brother’s wife, and for many other wrongs he had done. So Herod put John in prison, adding this sin to his many others.

The Baptism of Jesus

One day when the crowds were being baptized, Jesus himself was baptized. As he was praying, the heavens opened, and the Holy Spirit, in bodily form, descended on him like a dove. And a voice from heaven said, “You are my dearly loved Son, and you bring me great joy.”
__________

Today’s lengthy reading takes us from the birth of Jesus all the way to his baptism. In between, Luke includes prophesies and promises surrounding the coming of the Messiah. And at the end, God adds His seal of approval – Jesus is God’s beloved Son who brings Him great joy. Jesus will fulfill God’s purposes and promises for His people. So let’s review some of these promises –

Almighty God, you have given your only-begotten Son to take our nature upon him, and to be born of a pure virgin: Grant that we, who have been born again and made your children by adoption and grace, may daily be renewed by your Holy Spirit; through Jesus Christ our Lord, to whom with you and the same Spirit be honor and glory, now and for ever. Amen.