Almighty God, you gave your only Son to be for us both a
sacrifice for sin and an example of godly living: Give us grace
thankfully to receive his inestimable benefits, and daily to follow
the blessed steps of his most holy life; through Jesus Christ our
Lord, who lives and reigns with you and the Holy Spirit, one
God, for ever and ever. Amen.

Simon fell to his knees before Jesus and said,
“Oh, Lord, please leave me—I’m such a sinful man.”
Jesus replied to Simon,
“Don’t be afraid! From now on you’ll be fishing for people!”
(Luke 5:8,10b)

“Holy, holy, holy is the Lord of Heaven’s Armies!
The whole earth is filled with his glory!”

Their voices shook the Temple to its foundations, and the entire building was filled with smoke.

Then I said, “It’s all over! I am doomed, for I am a sinful man. I have filthy lips, and I live among a people with filthy lips. Yet I have seen the King, the Lord of Heaven’s Armies.”

Then one of the seraphim flew to me with a burning coal he had taken from the altar with a pair of tongs. He touched my lips with it and said, “See, this coal has touched your lips. Now your guilt is removed, and your sins are forgiven.”

Then I heard the Lord asking, “Whom should I send as a messenger to this people? Who will go for us?”

5:1 One day as Jesus was preaching on the shore of the Sea of Galilee, great crowds pressed in on him to listen to the word of God. He noticed two empty boats at the water’s edge, for the fishermen had left them and were washing their nets. Stepping into one of the boats, Jesus asked Simon, its owner, to push it out into the water. So he sat in the boat and taught the crowds from there.

When he had finished speaking, he said to Simon, “Now go out where it is deeper, and let down your nets to catch some fish.” 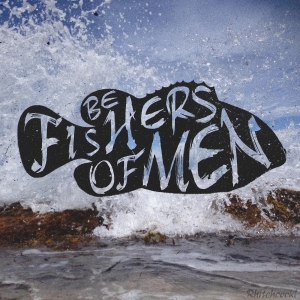 “Master,” Simon replied, “we worked hard all last night and didn’t catch a thing. But if you say so, I’ll let the nets down again.” And this time their nets were so full of fish they began to tear! A shout for help brought their partners in the other boat, and soon both boats were filled with fish and on the verge of sinking.

When Simon Peter realized what had happened, he fell to his knees before Jesus and said, “Oh, Lord, please leave me—I’m such a sinful man.” For he was awestruck by the number of fish they had caught, as were the others with him. His partners, James and John, the sons of Zebedee, were also amazed.

Jesus replied to Simon, “Don’t be afraid! From now on you’ll be fishing for people!” And as soon as they landed, they left everything and followed Jesus.

+O God, grant that we may desire you, and desiring you seek you, and seeking you find you, and finding you be satisfied in you for ever. Amen.

+ Almighty and eternal God, so draw our hearts to you, so guide our minds, so fill our imaginations, so control our wills, that we may be wholly yours, utterly dedicated to you; and then use us, we pray, as you will, and always to your glory and the welfare of your people; through our Lord and Savior Jesus Christ. Amen.

Let us make our way together, Lord;
Wherever you go I must go:
And through whatever you pass,
There too I will pass.