Heavenly Father, you have delivered us from the dominion of
sin and death, and brought us into the kingdom of your beloved
Son: Grant that, as by his death he has called us to life, so by his
love he may raise us to eternal joys; who lives and reigns with
you, in the unity of the Holy Spirit, one God, now and for ever.
Amen.

“Don’t be ridiculous!” Saul replied. “There’s no way you can fight this Philistine and possibly win! You’re only a boy, and he’s been a man of war since his youth.”

But David persisted. “I have been taking care of my father’s sheep and goats,” he said. “When a lion or a bear comes to steal a lamb from the flock, I go after it with a club and rescue the lamb from its mouth. If the animal turns on me, I catch it by the jaw and club it to death. I have done this to both lions and bears, and I’ll do it to this pagan Philistine, too, for he has defied the armies of the living God! The Lord who rescued me from the claws of the lion and the bear will rescue me from this Philistine!”

Saul finally consented. “All right, go ahead,” he said. “And may the Lord be with you!”

Then Saul gave David his own armor—a bronze helmet and a coat of mail. David put it on, strapped the sword over it, and took a step or two to see what it was like, for he had never worn such things before.

“I can’t go in these,” he protested to Saul. “I’m not used to them.” So David took them off again. He picked up five smooth stones from a stream and put them into his shepherd’s bag. Then, armed only with his shepherd’s staff and sling, he started across the valley to fight the Philistine.

Goliath walked out toward David with his shield bearer ahead of him, sneering in contempt at this ruddy-faced boy. “Am I a dog,” he roared at David, “that you come at me with a stick?” And he cursed David by the names of his gods. “Come over here, and I’ll give your flesh to the birds and wild animals!” Goliath yelled. 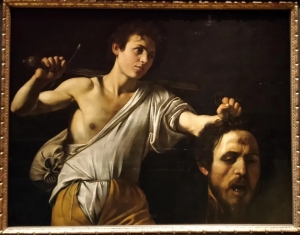 David replied to the Philistine, “You come to me with sword, spear, and javelin, but I come to you in the name of the Lord of Heaven’s Armies—the God of the armies of Israel, whom you have defied. Today the Lord will conquer you, and I will kill you and cut off your head. And then I will give the dead bodies of your men to the birds and wild animals, and the whole world will know that there is a God in Israel! And everyone assembled here will know that the Lord rescues his people, but not with sword and spear. This is the Lord’s battle, and he will give you to us!”

As Goliath moved closer to attack, David quickly ran out to meet him. Reaching into his shepherd’s bag and taking out a stone, he hurled it with his sling and hit the Philistine in the forehead. The stone sank in, and Goliath stumbled and fell face down on the ground.

So David triumphed over the Philistine with only a sling and a stone, for he had no sword. Then David ran over and pulled Goliath’s sword from its sheath. David used it to kill him and cut off his head.

When the Philistines saw that their champion was dead, they turned and ran.

24:36 And just as they were telling about it, Jesus himself was suddenly standing there among them. “Peace be with you,” he said. But the whole group was startled and frightened, thinking they were seeing a ghost!

“Why are you frightened?” he asked. “Why are your hearts filled with doubt? Look at my hands. Look at my feet. You can see that it’s really me. Touch me and make sure that I am not a ghost, because ghosts don’t have bodies, as you see that I do.” As he spoke, he showed them his hands and his feet.

Listen to the words (Peace be with you)
ReSound Worship

May the love of Christ
be active in our hearts,
be heard in our words,
be seen in our actions
and inform our choices
today and all days. Amen.