Gracious Father, whose blessed Son Jesus Christ came down
from heaven to be the true bread which gives life to the world:
Evermore give us this bread, that he may live in us, and we in
him; who lives and reigns with you and the Holy Spirit, one
God, now and for ever. Amen.

Jesus took the five loaves and two fish,
looked up toward heaven, and blessed them.
Then, breaking the loaves into pieces,
he kept giving the bread and fish to the disciples
so they could distribute it to the people.
(Luke 9:16)

4:1 One day the widow of a member of the group of prophets came to Elisha and cried out, “My husband who served you is dead, and you know how he feared the Lord. But now a creditor has come, threatening to take my two sons as slaves.” “What can I do to help you?” Elisha asked. “Tell me, what do you have in the house?”

“Nothing at all, except a flask of olive oil,” she replied.

And Elisha said, “Borrow as many empty jars as you can from your friends and neighbors. Then go into your house with your sons and shut the door behind you. Pour olive oil from your flask into the jars, setting each one aside when it is filled.”

So she did as she was told. Her sons kept bringing jars to her, and she filled one after another. Soon every container was full to the brim!

“Bring me another jar,” she said to one of her sons.

“There aren’t any more!” he told her. And then the olive oil stopped flowing.

When she told the man of God what had happened, he said to her, “Now sell the olive oil and pay your debts, and you and your sons can live on what is left over.”

9:10 When the apostles returned, they told Jesus everything they had done. Then he slipped quietly away with them toward the town of Bethsaida. But the crowds found out where he was going, and they followed him. He welcomed them and taught them about the Kingdom of God, and he healed those who were sick.

Late in the afternoon the twelve disciples came to him and said, “Send the crowds away to the nearby villages and farms, so they can find food and lodging for the night. There is nothing to eat here in this remote place.” 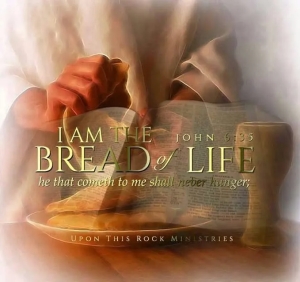 But Jesus said, “You feed them.”

“But we have only five loaves of bread and two fish,” they answered. “Or are you expecting us to go and buy enough food for this whole crowd?” For there were about 5,000 men there.

Jesus replied, “Tell them to sit down in groups of about fifty each.” So the people all sat down. Jesus took the five loaves and two fish, looked up toward heaven, and blessed them. Then, breaking the loaves into pieces, he kept giving the bread and fish to the disciples so they could distribute it to the people. They all ate as much as they wanted, and afterward, the disciples picked up twelve baskets of leftovers!

Break Thou the Bread of Life ~ Keswick
Easy Worship Resources

For Satisfaction in Christ – Julian of Norwich

+ O God, of your goodness, give me yourself, for you are enough for me. I can ask for nothing less that is completely to your honor, and if I do ask anything less, I shall always be in want. Only in you I have all. Amen.

Be the Life I live
Be the Love I give