Almighty God, whose blessed Son was led by the Spirit to be
tempted by Satan: Come quickly to help us who are assaulted
by many temptations, and, as you know the weaknesses of each
of us, let each one find you mighty to save; through Jesus Christ
your Son our Lord, who lives and reigns with you and the Holy
Spirit, one God, now and for ever. Amen.

“The Lord knows how
to rescue godly people from their trials,
even while keeping the wicked under punishment
until the day of final judgment.
He is especially hard on those
who follow their own twisted sexual desire,
and who despise authority.”
(2 Peter 2:9-10)

Cleansing for the High Priest

3:1 Then the angel showed me Jeshua the high priest standing before the angel of the Lord. The Accuser, Satan, was there at the angel’s right hand, making accusations against Jeshua. And the Lord said to Satan, “I, the Lord, reject your accusations, Satan. Yes, the Lord, who has chosen Jerusalem, rebukes you. This man is like a burning stick that has been snatched from the fire.”

Jeshua’s clothing was filthy as he stood there before the angel. So the angel said to the others standing there, “Take off his filthy clothes.” And turning to Jeshua he said, “See, I have taken away your sins, and now I am giving you these fine new clothes.”

Then the angel of the Lord spoke very solemnly to Jeshua and said, “This is what the Lord of Heaven’s Armies says: If you follow my ways and carefully serve me, then you will be given authority over my Temple and its courtyards. I will let you walk among these others standing here.

“Listen to me, O Jeshua the high priest, and all you other priests. You are symbols of things to come. Soon I am going to bring my servant, the Branch. Now look at the jewel I have set before Jeshua, a single stone with seven facets. I will engrave an inscription on it, says the Lord of Heaven’s Armies, and I will remove the sins of this land in a single day.

“And on that day, says the Lord of Heaven’s Armies, each of you will invite your neighbor to sit with you peacefully under your own grapevine and fig tree.”

2:4 For God did not spare even the angels who sinned. He threw them into hell, in gloomy pits of darkness, where they are being held until the day of judgment. And God did not spare the ancient world—except for Noah and the seven others in his family. Noah warned the world of God’s righteous judgment. So God protected Noah when he destroyed the world of ungodly people with a vast flood. Later, God condemned the cities of Sodom and Gomorrah and turned them into heaps of ashes. He made them an example of what will happen to ungodly people. But God also rescued Lot out of Sodom because he was a righteous man who was sick of the shameful immorality of the wicked people around him. Yes, Lot was a righteous man who was tormented in his soul by the wickedness he saw and heard day after day. So you see, the Lord knows how to rescue godly people from their trials, even while keeping the wicked under punishment until the day of final judgment. He is especially hard on those who follow their own twisted sexual desire, and who despise authority.

These people are proud and arrogant, daring even to scoff at supernatural beings without so much as trembling. But the angels, who are far greater in power and strength, do not dare to bring from the Lord a charge of blasphemy against those supernatural beings. 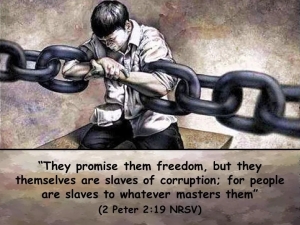 These false teachers are like unthinking animals, creatures of instinct, born to be caught and destroyed. They scoff at things they do not understand, and like animals, they will be destroyed. Their destruction is their reward for the harm they have done. They love to indulge in evil pleasures in broad daylight. They are a disgrace and a stain among you. They delight in deception even as they eat with you in your fellowship meals. They commit adultery with their eyes, and their desire for sin is never satisfied. They lure unstable people into sin, and they are well trained in greed. They live under God’s curse. They have wandered off the right road and followed the footsteps of Balaam son of Beor, who loved to earn money by doing wrong. But Balaam was stopped from his mad course when his donkey rebuked him with a human voice.

These people are as useless as dried-up springs or as mist blown away by the wind. They are doomed to blackest darkness. They brag about themselves with empty, foolish boasting. With an appeal to twisted sexual desires, they lure back into sin those who have barely escaped from a lifestyle of deception. They promise freedom, but they themselves are slaves of sin and corruption. For you are a slave to whatever controls you. And when people escape from the wickedness of the world by knowing our Lord and Savior Jesus Christ and then get tangled up and enslaved by sin again, they are worse off than before. It would be better if they had never known the way to righteousness than to know it and then reject the command they were given to live a holy life.

+ Show favor to your people, O Lord, who turn to you in weeping, fasting, and prayer. For you are a merciful God, full of compassion, long-suffering, and abounding in steadfast love. You spare when we deserve punishment, and in your wrath you remember mercy. Spare your people, good Lord, spare us; in the multitude of your mercies, look upon us and forgive us; through the merits and mediation of your blessed Son Jesus Christ our Lord. Amen.

This is a trustworthy saying, and everyone should accept it: “Christ Jesus came into the world to save sinners”—and I am the worst of them all.
(1 Timothy 1:15)

May God our Redeemer show us compassion and love.