Almighty and everlasting God, whose will it is to restore all
things in your well-beloved Son, the King of kings and Lord of
lords: Mercifully grant that the peoples of the earth, divided and
enslaved by sin, may be freed and brought together under his
most gracious rule; who lives and reigns with you and the
Holy Spirit, one God, now and for ever. Amen.

Then they heard a loud voice from heaven
saying to them, “Come up here!”
And they went up to heaven in a cloud,
and their enemies watched them.
And at that hour there was a great earthquake,
and a tenth of the city fell.
Seven thousand people were killed in the earthquake,
and the rest were terrified and gave glory to the God of heaven.
(Revelation 11:12-13)

23:15 Moreover, the altar at Bethel, the high place erected by Jeroboam the son of Nebat, who made Israel to sin, that altar with the high place he pulled down and burned, reducing it to dust. He also burned the Asherah. And as Josiah turned, he saw the tombs there on the mount. And he sent and took the bones out of the tombs and burned them on the altar and defiled it, according to the word of the Lord that the man of God proclaimed, who had predicted these things. Then he said, “What is that monument that I see?” And the men of the city told him, “It is the tomb of the man of God who came from Judah and predicted these things that you have done against the altar at Bethel.”  And he said, “Let him be; let no man move his bones.” So they let his bones alone, with the bones of the prophet who came out of Samaria. And Josiah removed all the shrines also of the high places that were in the cities of Samaria, which kings of Israel had made, provoking the Lord to anger. He did to them according to all that he had done at Bethel. And he sacrificed all the priests of the high places who were there, on the altars, and burned human bones on them. Then he returned to Jerusalem.

23:21 And the king commanded all the people, “Keep the Passover to the Lord your God, as it is written in this Book of the Covenant.” For no such Passover had been kept since the days of the judges who judged Israel, or during all the days of the kings of Israel or of the kings of Judah. But in the eighteenth year of King Josiah this Passover was kept to the Lord in Jerusalem.

Moreover, Josiah put away the mediums and the necromancers and the household gods and the idols and all the abominations that were seen in the land of Judah and in Jerusalem, that he might establish the words of the law that were written in the book that Hilkiah the priest found in the house of the Lord. Before him there was no king like him, who turned to the Lord with all his heart and with all his soul and with all his might, according to all the Law of Moses, nor did any like him arise after him.

11:1 Then I was given a measuring rod like a staff, and I was told, “Rise and measure the temple of God and the altar and those who worship there, but do not measure the court outside the temple; leave that out, for it is given over to the nations, and they will trample the holy city for forty-two months. And I will grant authority to my two witnesses, and they will prophesy for 1,260 days, clothed in sackcloth.” 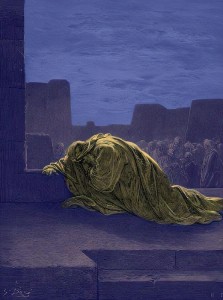 These are the two olive trees and the two lampstands that stand before the Lord of the earth. And if anyone would harm them, fire pours from their mouth and consumes their foes. If anyone would harm them, this is how he is doomed to be killed. They have the power to shut the sky, that no rain may fall during the days of their prophesying, and they have power over the waters to turn them into blood and to strike the earth with every kind of plague, as often as they desire. And when they have finished their testimony, the beast that rises from the bottomless pit will make war on them and conquer them and kill them, and their dead bodies will lie in the street of the great city that symbolically is called Sodom and Egypt, where their Lord was crucified. For three and a half days some from the peoples and tribes and languages and nations will gaze at their dead bodies and refuse to let them be placed in a tomb, and those who dwell on the earth will rejoice over them and make merry and exchange presents, because these two prophets had been a torment to those who dwell on the earth. But after the three and a half days a breath of life from God entered them, and they stood up on their feet, and great fear fell on those who saw them. Then they heard a loud voice from heaven saying to them, “Come up here!” And they went up to heaven in a cloud, and their enemies watched them. And at that hour there was a great earthquake, and a tenth of the city fell. Seven thousand people were killed in the earthquake, and the rest were terrified and gave glory to the God of heaven.

The second woe has passed; behold, the third woe is soon to come.

Back To God | Reba McEntire

+ Our God, in whom we trust: Strengthen us not to regard overmuch who is for us or who is against us, but to see to it that we be with you in everything we do. Amen.

+ Go before us, O Lord, in all our doings with your most gracious favor, and further us with your continual help; that in all our works begun, continued, and ended in you, we may glorify your holy Name, and finally, through your mercy, obtain everlasting life; through Jesus Christ our Lord. Amen.