Lord of all power and might, the author and giver of all good
things: Graft in our hearts the love of your Name, increase in
us true religion, nourish us with all goodness, and bring forth in
us the fruit of good works; through Jesus Christ our Lord, who
lives and reigns with you and the Holy Spirit, one God, for ever
and ever. Amen.

18:6  As they were coming home, when David returned from striking down the Philistine, the women came out of all the cities of Israel, singing and dancing, to meet King Saul, with tambourines, with songs of joy, and with musical instruments. And the women sang to one another as they celebrated,

“Saul has struck down his thousands,
and David his ten thousands.”

The next day a harmful spirit from God rushed upon Saul, and he raved within his house while David was playing the lyre, as he did day by day. Saul had his spear in his hand. And Saul hurled the spear, for he thought, “I will pin David to the wall.” But David evaded him twice.

Saul was afraid of David because the Lord was with him but had departed from Saul. So Saul removed him from his presence and made him a commander of a thousand. And he went out and came in before the people. And David had success in all his undertakings, for the Lord was with him. And when Saul saw that he had great success, he stood in fearful awe of him. But all Israel and Judah loved David, for he went out and came in before them.

18:17  Then Saul said to David, “Here is my elder daughter Merab. I will give her to you for a wife. Only be valiant for me and fight the Lord’s battles.” For Saul thought, “Let not my hand be against him, but let the hand of the Philistines be against him.” And David said to Saul, “Who am I, and who are my relatives, my father’s clan in Israel, that I should be son-in-law to the king?” But at the time when Merab, Saul’s daughter, should have been given to David, she was given to Adriel the Meholathite for a wife.

Now Saul’s daughter Michal loved David. And they told Saul, and the thing pleased him. Saul thought, “Let me give her to him, that she may be a snare for him and that the hand of the Philistines may be against him.” Therefore Saul said to David a second time, “You shall now be my son-in-law.” And Saul commanded his servants, “Speak to David in private and say, ‘Behold, the king has delight in you, and all his servants love you. Now then become the king’s son-in-law.’” And Saul’s servants spoke those words in the ears of David. And David said, “Does it seem to you a little thing to become the king’s son-in-law, since I am a poor man and have no reputation?” And the servants of Saul told him, “Thus and so did David speak.” Then Saul said, “Thus shall you say to David, ‘The king desires no bride-price except a hundred foreskins of the Philistines, that he may be avenged of the king’s enemies.’” Now Saul thought to make David fall by the hand of the Philistines. And when his servants told David these words, it pleased David well to be the king’s son-in-law. Before the time had expired, David arose and went, along with his men, and killed two hundred of the Philistines. And David brought their foreskins, which were given in full number to the king, that he might become the king’s son-in-law. And Saul gave him his daughter Michal for a wife. But when Saul saw and knew that the Lord was with David, and that Michal, Saul’s daughter, loved him, Saul was even more afraid of David. So Saul was David’s enemy continually.

Then the commanders of the Philistines came out to battle, and as often as they came out David had more success than all the servants of Saul, so that his name was highly esteemed.

The Storm at Sea

27:13  Now when the south wind blew gently, supposing that they had obtained their purpose, they weighed anchor and sailed along Crete, close to the shore. But soon a tempestuous wind, called the northeaster, struck down from the land. And when the ship was caught and could not face the wind, we gave way to it and were driven along. Running under the lee of a small island called Cauda, managed with difficulty to secure the ship’s boat. After hoisting it up, they used supports to undergird the ship. Then, fearing that they would run aground on the Syrtis, they lowered the gear, and thus they were driven along. Since we were violently storm-tossed, they began the next day to jettison the cargo. And on the third day they threw the ship’s tackle overboard with their own hands. When neither sun nor stars appeared for many days, and no small tempest lay on us, all hope of our being saved was at last abandoned. 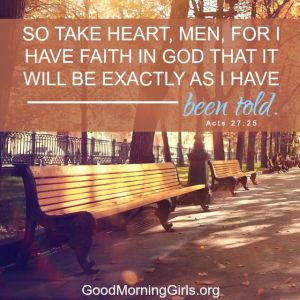 Since they had been without food for a long time, Paul stood up among them and said, “Men, you should have listened to me and not have set sail from Crete and incurred this injury and loss. Yet now I urge you to take heart, for there will be no loss of life among you, but only of the ship. For this very night there stood before me an angel of the God to whom I belong and whom I worship, and he said, ‘Do not be afraid, Paul; you must stand before Caesar. And behold, God has granted you all those who sail with you.’ So take heart, men, for I have faith in God that it will be exactly as I have been told. But we must run aground on some island.”

When the fourteenth night had come, as we were being driven across the Adriatic Sea, about midnight the sailors suspected that they were nearing land. So they took a sounding and found twenty fathoms. A little farther on they took a sounding again and found fifteen fathoms. And fearing that we might run on the rocks, they let down four anchors from the stern and prayed for day to come. And as the sailors were seeking to escape from the ship, and had lowered the ship’s boat into the sea under pretense of laying out anchors from the bow, Paul said to the centurion and the soldiers, “Unless these men stay in the ship, you cannot be saved.” Then the soldiers cut away the ropes of the ship’s boat and let it go.

As day was about to dawn, Paul urged them all to take some food, saying, “Today is the fourteenth day that you have continued in suspense and without food, having taken nothing. Therefore I urge you to take some food. For it will give you strength, for not a hair is to perish from the head of any of you.” And when he had said these things, he took bread, and giving thanks to God in the presence of all he broke it and began to eat. Then they all were encouraged and ate some food themselves. (We were in all 276 persons in the ship.) And when they had eaten enough, they lightened the ship, throwing out the wheat into the sea.

+ Gracious God and most merciful Father, you have granted us the rich and precious jewel of your holy Word: Assist us with your Spirit, that the same Word may be written in our hearts to our everlasting comfort, to reform us, to renew us according to your own image, to build us up and edify us into the perfect dwelling place of your Christ, sanctifying and increasing in us all heavenly virtues; grant this, O heavenly Father, for Jesus Christ’s sake. Amen.