Opening (A Collect for Peace – Tuesday)

O God, the author of peace and lover of concord, to know you is eternal life and to serve you is perfect freedom: Defend us, your humble servants, in all assaults of our enemies; that we, surely trusting in your defense, may not fear the power of any adversaries, through the might of Jesus Christ our Lord. Amen.
__________

But there was a certain man named Ananias who, with his wife, Sapphira, sold some property. He brought part of the money to the apostles, claiming it was the full amount. With his wife’s consent, he kept the rest.

Then Peter said, “Ananias, why have you let Satan fill your heart? You lied to the Holy Spirit, and you kept some of the money for yourself. The property was yours to sell or not sell, as you wished. And after selling it, the money was also yours to give away. How could you do a thing like this? You weren’t lying to us but to God!” 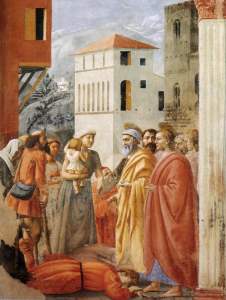 As soon as Ananias heard these words, he fell to the floor and died. Everyone who heard about it was terrified. Then some young men got up, wrapped him in a sheet, and took him out and buried him.

About three hours later his wife came in, not knowing what had happened. Peter asked her, “Was this the price you and your husband received for your land?”

And Peter said, “How could the two of you even think of conspiring to test the Spirit of the Lord like this? The young men who buried your husband are just outside the door, and they will carry you out, too.”

Instantly, she fell to the floor and died. When the young men came in and saw that she was dead, they carried her out and buried her beside her husband. Great fear gripped the entire church and everyone else who heard what had happened.

The Apostles Heal Many

The apostles were performing many miraculous signs and wonders among the people. And all the believers were meeting regularly at the Temple in the area known as Solomon’s Colonnade. But no one else dared to join them, even though all the people had high regard for them. Yet more and more people believed and were brought to the Lord—crowds of both men and women.

As a result of the apostles’ work, sick people were brought out into the streets on beds and mats so that Peter’s shadow might fall across some of them as he went by. Crowds came from the villages around Jerusalem, bringing their sick and those possessed by evil spirits, and they were all healed.

The high priest and his officials, who were Sadducees, were filled with jealousy. They arrested the apostles and put them in the public jail. But an angel of the Lord came at night, opened the gates of the jail, and brought them out. Then he told them, “Go to the Temple and give the people this message of life!”

So at daybreak the apostles entered the Temple, as they were told, and immediately began teaching.

When the high priest and his officials arrived, they convened the high council—the full assembly of the elders of Israel. Then they sent for the apostles to be brought from the jail for trial. But when the Temple guards went to the jail, the men were gone. So they returned to the council and reported, “The jail was securely locked, with the guards standing outside, but when we opened the gates, no one was there!”

When the captain of the Temple guard and the leading priests heard this, they were perplexed, wondering where it would all end. Then someone arrived with startling news: “The men you put in jail are standing in the Temple, teaching the people!”

The captain went with his Temple guards and arrested the apostles, but without violence, for they were afraid the people would stone them. Then they brought the apostles before the high council, where the high priest confronted them. “We gave you strict orders never again to teach in this man’s name!” he said. “Instead, you have filled all Jerusalem with your teaching about him, and you want to make us responsible for his death!”

But Peter and the apostles replied, “We must obey God rather than any human authority. The God of our ancestors raised Jesus from the dead after you killed him by hanging him on a cross. Then God put him in the place of honor at his right hand as Prince and Savior. He did this so the people of Israel would repent of their sins and be forgiven. We are witnesses of these things and so is the Holy Spirit, who is given by God to those who obey him.”

When they heard this, the high council was furious and decided to kill them. But one member, a Pharisee named Gamaliel, who was an expert in religious law and respected by all the people, stood up and ordered that the men be sent outside the council chamber for a while. Then he said to his colleagues, “Men of Israel, take care what you are planning to do to these men! Some time ago there was that fellow Theudas, who pretended to be someone great. About 400 others joined him, but he was killed, and all his followers went their various ways. The whole movement came to nothing. After him, at the time of the census, there was Judas of Galilee. He got people to follow him, but he was killed, too, and all his followers were scattered.

“So my advice is, leave these men alone. Let them go. If they are planning and doing these things merely on their own, it will soon be overthrown. But if it is from God, you will not be able to overthrow them. You may even find yourselves fighting against God!”

The others accepted his advice. They called in the apostles and had them flogged. Then they ordered them never again to speak in the name of Jesus, and they let them go.

The apostles left the high council rejoicing that God had counted them worthy to suffer disgrace for the name of Jesus. And every day, in the Temple and from house to house, they continued to teach and preach this message: “Jesus is the Messiah.”

But as the believers rapidly multiplied, there were rumblings of discontent. The Greek-speaking believers complained about the Hebrew-speaking believers, saying that their widows were being discriminated against in the daily distribution of food.

Everyone liked this idea, and they chose the following: Stephen (a man full of faith and the Holy Spirit), Philip, Procorus, Nicanor, Timon, Parmenas, and Nicolas of Antioch (an earlier convert to the Jewish faith). These seven were presented to the apostles, who prayed for them as they laid their hands on them.

So God’s message continued to spread. The number of believers greatly increased in Jerusalem, and many of the Jewish priests were converted, too.

Stephen, a man full of God’s grace and power, performed amazing miracles and signs among the people. But one day some men from the Synagogue of Freed Slaves, as it was called, started to debate with him. They were Jews from Cyrene, Alexandria, Cilicia, and the province of Asia. None of them could stand against the wisdom and the Spirit with which Stephen spoke.

So they persuaded some men to lie about Stephen, saying, “We heard him blaspheme Moses, and even God.” This roused the people, the elders, and the teachers of religious law. So they arrested Stephen and brought him before the high council.

The lying witnesses said, “This man is always speaking against the holy Temple and against the law of Moses. We have heard him say that this Jesus of Nazareth will destroy the Temple and change the customs Moses handed down to us.”

At this point everyone in the high council stared at Stephen, because his face became as bright as an angel’s.
__________

We must obey God rather than any human authority.

In today’s reading the cost of following Jesus is revealed, as the hostility received by Jesus himself is now directed at his followers who preach, teach, and heal in his powerful name.

Filled with the Holy Spirit, the apostles “perform many miraculous signs and wonders among the people” in Jesus’ name. And while the sick and demonized seek out the apostles for healing and deliverance, the same religious leaders who killed Jesus, seek out his followers in an attempt to silence them, and eventually kill them.

But persecution has the opposite effect on Jesus’ followers –

Eventually, however the religious authorities catch up with Stephen – “a man full of God’s grace and power, who performed amazing miracles and signs among the people.”

Morning Prayer: For the ordination of deacons

Almighty God, by your divine providence you appointed various ministers in your church, and you inspired your apostles to appoint to deacons the first martyr Stephen, with others: mercifully behold these your servants now called to the same ministry; so fill them with the truth of your Word and adorn them with holiness of life, that by word and good example they may faithfully serve you in this ministry, to the glory of your Name and the edification of your church; through our Savior Jesus Christ, who lives and reigns with you and the Holy Spirit, now and for ever. Amen.
__________