Opening (A Collect for Grace – Wednesday)

O Lord, our heavenly Father, almighty and everlasting God, you have brought us safely to the beginning of this day: Defend us by your mighty power, that we may not fall into sin nor run into any danger; and that guided by your Spirit, we may do what is righteous in your sight; through Jesus Christ our Lord. Amen.
__________

Now Jesus was standing before Pilate, the Roman governor. “Are you the king of the Jews?” the governor asked him.

Jesus replied, “You have said it.”

But when the leading priests and the elders made their accusations against him, Jesus remained silent. “Don’t you hear all these charges they are bringing against you?” Pilate demanded. But Jesus made no response to any of the charges, much to the governor’s surprise. 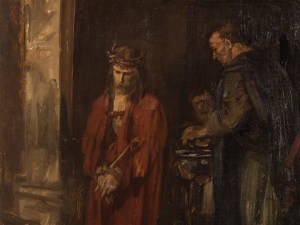 Now it was the governor’s custom each year during the Passover celebration to release one prisoner to the crowd—anyone they wanted. This year there was a notorious prisoner, a man named Barabbas. As the crowds gathered before Pilate’s house that morning, he asked them, “Which one do you want me to release to you—Barabbas, or Jesus who is called the Messiah?” (He knew very well that the religious leaders had arrested Jesus out of envy.)

Just then, as Pilate was sitting on the judgment seat, his wife sent him this message: “Leave that innocent man alone. I suffered through a terrible nightmare about him last night.”

Meanwhile, the leading priests and the elders persuaded the crowd to ask for Barabbas to be released and for Jesus to be put to death. So the governor asked again, “Which of these two do you want me to release to you?”

The crowd shouted back, “Barabbas!”

Pilate responded, “Then what should I do with Jesus who is called the Messiah?”

They shouted back, “Crucify him!”

“Why?” Pilate demanded. “What crime has he committed?”

But the mob roared even louder, “Crucify him!”

Pilate saw that he wasn’t getting anywhere and that a riot was developing. So he sent for a bowl of water and washed his hands before the crowd, saying, “I am innocent of this man’s blood. The responsibility is yours!”

And all the people yelled back, “We will take responsibility for his death—we and our children!”

So Pilate released Barabbas to them. He ordered Jesus flogged with a lead-tipped whip, then turned him over to the Roman soldiers to be crucified.

Christ is the Free Man. Look at Him, my soul at His nakedness, His blood, His sweat. The Eternal Prisoner! The soldiers beat Him, cursing and laughing drunkenly. The feel that they represent a higher civilization than His, a richer culture and an infinitely better race. In each blow there is contempt and greed. Are not the Roman soldiers masters of the world?

Even in His anguish and shame Christ takes pity on the soldiers in their captivity. He is the Free Man. Gaze on Him my soul. Does He have wealth, worldly power, an influential position in the organization of a country? No He has nothing but a body now and the soldiers treat His body as they please. Flesh, blood, skin, bones, hair – He has only these things now, and the kingdom of Hell wants to take these things from Him.

Look at Him, my soul. He is a Free Man; the only free man in Jerusalem.

My soul stands with Him. There by His side, under the lash of soldiers, freedom is to be found.