Opening (A Collect for Guidance – Thursday)

Heavenly Father, in you we live and move and have our being: We humbly pray you so to guide and govern us by your Holy Spirit, that in all the cares and occupations of our life we may not forget you, but may remember that we are ever walking in your sight; through Jesus Christ our Lord. Amen.
__________

Faith shows the reality of what we hope for; it is the evidence of things we cannot see. Through their faith, the people in days of old earned a good reputation.

By faith we understand that the entire universe was formed at God’s command, that what we now see did not come from anything that can be seen. 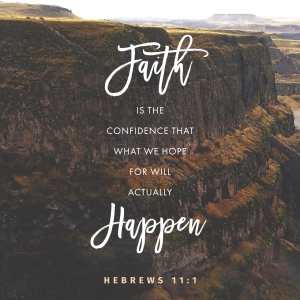 It was by faith that Abel brought a more acceptable offering to God than Cain did. Abel’s offering gave evidence that he was a righteous man, and God showed his approval of his gifts. Although Abel is long dead, he still speaks to us by his example of faith.

It was by faith that Enoch was taken up to heaven without dying—“he disappeared, because God took him.” For before he was taken up, he was known as a person who pleased God. And it is impossible to please God without faith. Anyone who wants to come to him must believe that God exists and that he rewards those who sincerely seek him.

It was by faith that Noah built a large boat to save his family from the flood. He obeyed God, who warned him about things that had never happened before. By his faith Noah condemned the rest of the world, and he received the righteousness that comes by faith.

It was by faith that Abraham obeyed when God called him to leave home and go to another land that God would give him as his inheritance. He went without knowing where he was going. And even when he reached the land God promised him, he lived there by faith—for he was like a foreigner, living in tents. And so did Isaac and Jacob, who inherited the same promise. Abraham was confidently looking forward to a city with eternal foundations, a city designed and built by God.

It was by faith that even Sarah was able to have a child, though she was barren and was too old. She believed that God would keep his promise. And so a whole nation came from this one man who was as good as dead—a nation with so many people that, like the stars in the sky and the sand on the seashore, there is no way to count them.

All these people died still believing what God had promised them. They did not receive what was promised, but they saw it all from a distance and welcomed it. They agreed that they were foreigners and nomads here on earth. Obviously people who say such things are looking forward to a country they can call their own. If they had longed for the country they came from, they could have gone back. But they were looking for a better place, a heavenly homeland. That is why God is not ashamed to be called their God, for he has prepared a city for them.
__________

Faith shows the reality of what we hope for; it is the evidence of things we cannot see.
– Hebrews 11:1

In today’s reading, faith is described along with examples of old testament saints who persevered in faith.

So what is the nature of faith? Faith confirms our confidence in Christ, and convicts us of our hope in Christ. Faith is the basis of all the Christian life means, and all the Christian hopes for. Faith is essential for connecting with God. Faith is a way of viewing all of life, what lies ahead as well as what is in the past. It involves accepting God’s viewpoint as He has revealed it in His Word.

It is impossible to please God without faith.
Anyone who wants to come to him must believe that God exists and
that he rewards those who sincerely seek him. – Hebrews 11:6

So how did faith play out in the lives of some of the old testament saints?

Heavenly Father: Raise up capable leaders in every faith community – grounded in Your Word and empowered by Your Spirit – whom You can use to mobilize the work of loving and protecting human life. And produce in me the character and faith required to support this good work. I ask this in Jesus’ name. Amen.

Mighty Everlasting Father, I humbly come before Your throne of grace and mercy, laying down my life before You. Only You can satisfy the longing within me; You are my heart’s desire. I yearn to be in Your Holy presence, constantly seeking Your will and Your great plans for my life. Draw me nearer and closer to You daily, as my thirst is quenched by Your springs of living waters. Increase my confidence and boldness that I may move forward in faith wherever You send me. I ask this in Jesus’ name. Amen.