Almighty God, who after the creation of the world rested from all your works and set aside a day of rest for all your creatures: Grant that we, putting away all earthly anxieties, may be duly prepared to meet you in worship, and that our rest here upon earth may be a preparation for the eternal rest promised to your people in heaven; through Jesus Christ our Lord. Amen.
__________

Afterward Jesus went up on a mountain and called out the ones he wanted to go with him. And they came to him. Then he appointed twelve of them and called them his apostles. They were to accompany him, and he would send them out to preach, giving them authority to cast out demons. These are the twelve he chose:

Simon (whom he named Peter), James and John (the sons of Zebedee, but Jesus nicknamed them “Sons of Thunder”, Andrew, Philip, Bartholomew, Matthew, Thomas, James (son of Alphaeus), Thaddaeus, Simon (the zealot), Judas Iscariot (who later betrayed him).

Jesus and the Prince of Demons

One time Jesus entered a house, and the crowds began to gather again. Soon he and his disciples couldn’t even find time to eat. When his family heard what was happening, they tried to take him away. “He’s out of his mind,” they said.

But the teachers of religious law who had arrived from Jerusalem said, “He’s possessed by Satan, the prince of demons. That’s where he gets the power to cast out demons.”

Jesus called them over and responded with an illustration. “How can Satan cast out Satan?” he asked. “A kingdom divided by civil war will collapse. Similarly, a family splintered by feuding will fall apart. And if Satan is divided and fights against himself, how can he stand? He would never survive. Let me illustrate this further. Who is powerful enough to enter the house of a strong man and plunder his goods? Only someone even stronger—someone who could tie him up and then plunder his house.

“I tell you the truth, all sin and blasphemy can be forgiven, but anyone who blasphemes the Holy Spirit will never be forgiven. This is a sin with eternal consequences.” He told them this because they were saying, “He’s possessed by an evil spirit.” 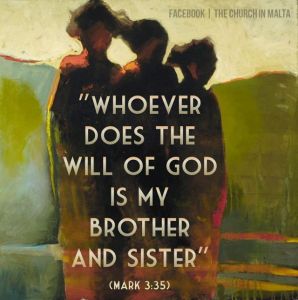 The True Family of Jesus

Then Jesus’ mother and brothers came to see him. They stood outside and sent word for him to come out and talk with them. There was a crowd sitting around Jesus, and someone said, “Your mother and your brothers are outside asking for you.”

Jesus replied, “Who is my mother? Who are my brothers?” Then he looked at those around him and said, “Look, these are my mother and brothers. Anyone who does God’s will is my brother and sister and mother.”
__________

If we look at these three stories together, a common theme emerges – Jesus is beginning to surround himself with a new family of faith. A few things are noteworthy –

Afterward Jesus went up on a mountain and
called out the ones he wanted to go with him.
And they came to him. – Mark 3:13

+ Jesus chose “the twelve” he wanted to go with him, and they responded in faith by following him. Jesus’ new family of faith is beginning to take shape.
+ Jesus gives them special authority for ministry – beginning their training to carry on his ministry of preaching, teaching , and healing.

When his family heard what was happening, they tried to take him away.
“He’s out of his mind,” they said. – Mark 3:21

+ Jesus’ natural family doesn’t understand who Jesus is, and what the Holy Spirit has empowered him to do. They are becoming a hindrance to him.
+ Jesus remarks that “a family splintered by feuding will fall apart,” in response to the religious leaders’ questioning his authority.
+ Jesus’ new family is shaped by faith and unified by the Holy Spirit.

Jesus replied, “Who is my mother? Who are my brothers?”
Then he looked at those around him and said,
“Look, these are my mother and brothers.
Anyone who does God’s will is my brother and sister and mother.”
– Mark 3:33-35

Prayer for the practical needs of persecuted believers:

Heavenly Father, our provider and sustainer: Attend to the needs of your family suffering great hardship and persecution, especially –

Heavenly Father, you know each one of your children by name: Have mercy on them and attend to their needs. I ask in Jesus’ name. Amen.

Heavenly Father: It’s my heart’s desire to do your will by believing in your Son Jesus Christ and following him as he leads. Thank you for including me in your family of faith. Please forgive my insubordination – either witting, or unwitting – and help me to trust you in all things. Grant me the authority that I need to carry on the ministry that you have given me. And open my eyes to new opportunities to be a bearer of the Good News of your Kingdom. I ask this in Jesus’ name. Amen.
__________

“Who You Say I Am” – Hillsong Worship