Monday of the Ninth Week in Ordinary Time

Dear brothers and sisters, I plead with you to give your bodies to God because of all he has done for you. Let them be a living and holy sacrifice—the kind he will find acceptable. This is truly the way to worship him.  – Romans 12:1 (NLT)

A Call to Trust the Lord

Isaiah 51  “Listen to me, all who hope for deliverance—all who seek the Lord! Consider the rock from which you were cut, the quarry from which you were mined. 2 Yes, think about Abraham, your ancestor, and Sarah, who gave birth to your nation. Abraham was only one man when I called him. But when I blessed him, he became a great nation.”

3 The Lord will comfort Israel again and have pity on her ruins. Her desert will blossom like Eden, her barren wilderness like the garden of the Lord. Joy and gladness will be found there. Songs of thanksgiving will fill the air.

4 “Listen to me, my people. Hear me, Israel, for my law will be proclaimed, and my justice will become a light to the nations. 5 My mercy and justice are coming soon. My salvation is on the way. My strong arm will bring justice to the nations. All distant lands will look to me and wait in hope for my powerful arm. 6 Look up to the skies above, and gaze down on the earth below. For the skies will disappear like smoke, and the earth will wear out like a piece of clothing. The people of the earth will die like flies, but my salvation lasts forever. My righteous rule will never end!

7 “Listen to me, you who know right from wrong, you who cherish my law in your hearts. Do not be afraid of people’s scorn, nor fear their insults. 8 For the moth will devour them as it devours clothing. The worm will eat at them as it eats wool. But my righteousness will last forever. My salvation will continue from generation to generation.”

9 Wake up, wake up, O Lord! Clothe yourself with strength! Flex your mighty right arm! Rouse yourself as in the days of old when you slew Egypt, the dragon of the Nile. 10 Are you not the same today, the one who dried up the sea, making a path of escape through the depths so that your people could cross over? 11 Those who have been ransomed by the Lord will return. They will enter Jerusalem singing, crowned with everlasting joy. Sorrow and mourning will disappear, and they will be filled with joy and gladness.

17 Wake up, wake up, O Jerusalem! You have drunk the cup of the Lord’s fury. You have drunk the cup of terror, tipping out its last drops. 18 Not one of your children is left alive to take your hand and guide you. 19 These two calamities have fallen on you: desolation and destruction, famine and war. And who is left to sympathize with you? Who is left to comfort you? 20 For your children have fainted and lie in the streets, helpless as antelopes caught in a net. The Lord has poured out his fury; God has rebuked them.

21 But now listen to this, you afflicted ones who sit in a drunken stupor, though not from drinking wine. 22 This is what the Sovereign Lord, your God and Defender, says: “See, I have taken the terrible cup from your hands. You will drink no more of my fury. 23 Instead, I will hand that cup to your tormentors, those who said, ‘We will trample you into the dust and walk on your backs.’”

Isaiah 52  Wake up, wake up, O Zion! Clothe yourself with strength. Put on your beautiful clothes, O holy city of Jerusalem, for unclean and godless people will enter your gates no longer. 2 Rise from the dust, O Jerusalem. Sit in a place of honor. Remove the chains of slavery from your neck, O captive daughter of Zion. 3 For this is what the Lord says: “When I sold you into exile, I received no payment. Now I can redeem you without having to pay for you.”

4 This is what the Sovereign Lord says: “Long ago my people chose to live in Egypt. Now they are oppressed by Assyria. 5 What is this?” asks the Lord. “Why are my people enslaved again? Those who rule them shout in exultation. My name is blasphemed all day long. 6 But I will reveal my name to my people, and they will come to know its power. Then at last they will recognize that I am the one who speaks to them.” 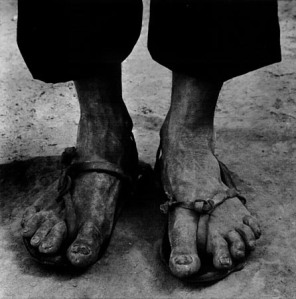 7 How beautiful on the mountains are the feet of the messenger who brings good news, the good news of peace and salvation, the news that the God of Israel reigns! 8 The watchmen shout and sing with joy, for before their very eyes they see the Lord returning to Jerusalem. 9 Let the ruins of Jerusalem break into joyful song, for the Lord has comforted his people. He has redeemed Jerusalem. 10 The Lord has demonstrated his holy power before the eyes of all the nations. All the ends of the earth will see the victory of our God.

11 Get out! Get out and leave your captivity, where everything you touch is unclean. Get out of there and purify yourselves, you who carry home the sacred objects of the Lord. 12 You will not leave in a hurry, running for your lives. For the Lord will go ahead of you; yes, the God of Israel will protect you from behind.

13 See, my servant will prosper; he will be highly exalted. 14 But many were amazed when they saw him. His face was so disfigured he seemed hardly human, and from his appearance, one would scarcely know he was a man. 15 And he will startle many nations. Kings will stand speechless in his presence. For they will see what they had not been told; they will understand what they had not heard about.

Isaiah 53  Who has believed our message? To whom has the Lord revealed his powerful arm? 2 My servant grew up in the Lord’s presence like a tender green shoot, like a root in dry ground. There was nothing beautiful or  majestic about his appearance, nothing to attract us to him. 3 He was despised and rejected—a man of sorrows, acquainted with deepest grief. We turned our backs on him and looked the other way. He was despised, and we did not care.

4 Yet it was our weaknesses he carried; it was our sorrows that weighed him down. And we thought his troubles were a punishment from God, a punishment for his own sins! 5 But he was pierced for our rebellion, crushed for our sins. He was beaten so we could be whole. He was whipped so we could be healed. 6 All of us, like sheep, have strayed away. We have left God’s paths to follow our own. Yet the Lord laid on him the sins of us all.

7 He was oppressed and treated harshly, yet he never said a word. He was led like a lamb to the slaughter. And as a sheep is silent before the shearers, he did not open his mouth. 8 Unjustly condemned, he was led away. No one cared that he died without descendants, that his life was cut short in midstream. But he was struck down for the rebellion of my people. 9 He had done no wrong and had never deceived anyone. But he was buried like a criminal; he was put in a rich man’s grave.

10 But it was the Lord’s good plan to crush him and cause him grief. Yet when his life is made an offering for sin, he will have many descendants. He will enjoy a long life, and the Lord’s good plan will prosper in his hands. 11 When he sees all that is accomplished by his anguish, he will be satisfied. And because of his experience, my righteous servant will make it possible for many to be counted righteous, for he will bear all their sins. 12 I will give him the honors of a victorious soldier, because he exposed himself to death. He was counted among the rebels. He bore the sins of many and interceded for rebels.

Thank you, my Savior, for choosing the way of the cross, the way of great sorrows. You took the sin that was mine, experiencing the separation from the Father that belonged to me. How I praise you, my Lord, for being not just a man of sorrows in general, but the man of my sorrows.

Today I pray for those in my life who are in the midst of sorrows. Relieve their suffering, dear Lord. May they know your presence and find hope and comfort in you. Amen.

“For his Spirit joins with our spirit to affirm that we are God’s children. And since we are his children, we are his heirs. In fact, together with Christ we are heirs of God’s glory. But if we are to share his glory, we must also share his suffering. Yet what we suffer now is nothing compared to the glory he will reveal to us later.” – Romans 8:16-18 (NLT)