The Ascension of the Lord

Lord Jesus, on this day You promised the Holy Spirit to the apostles, for the spreading of Your gospel to the ends of the earth – strengthen us by the power of the Spirit in bearing witness before the world. Fill us with a holy joy; teach us how to thank You with reverence and love on account of the ascension of Christ Your Son. You have raised us up with Him: where He, the head, has preceded us in glory, there we, the body, are called in hope. Through our Lord Jesus Christ, Your Son, who lives and reigns with You and the Holy Spirit, one God, for ever and ever. Amen.

In my first book I told you, Theophilus, about everything Jesus began to do and teach until the day he was taken up to heaven after giving his chosen apostles further instructions through the Holy Spirit. During the forty days after he suffered and died, he appeared to the apostles from time to time, and he proved to them in many ways that he was actually alive. And he talked to them about the Kingdom of God.

Once when he was eating with them, he commanded them, “Do not leave Jerusalem until the Father sends you the gift he promised, as I told you before. John baptized with water, but in just a few days you will be baptized with the Holy Spirit.”

So when the apostles were with Jesus, they kept asking him, “Lord, has the time come for you to free Israel and restore our kingdom?”

He replied, “The Father alone has the authority to set those dates and times, and they are not for you to know. But you will receive power when the Holy Spirit comes upon you. And you will be my witnesses, telling people about me everywhere — in Jerusalem, throughout Judea, in Samaria, and to the ends of the earth.”

After saying this, he was taken up into a cloud while they were watching, and they could no longer see him. As they strained to see him rising into heaven, two white-robed men suddenly stood among them. “Men of Galilee,” they said, “why are you standing here staring into heaven? Jesus has been taken from you into heaven, but someday he will return from heaven in the same way you saw him go!”
__________ 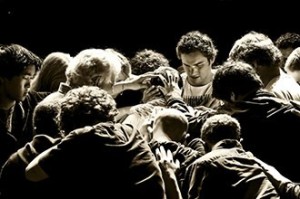 I pray for you constantly, asking God, the glorious Father of our Lord Jesus Christ, to give you spiritual wisdom and insight so that you might grow in your knowledge of God. I pray that your hearts will be flooded with light so that you can understand the confident hope he has given to those he called — his holy people who are his rich and glorious inheritance.

I also pray that you will understand the incredible greatness of God’s power for us who believe him. This is the same mighty power that raised Christ from the dead and seated him in the place of honor at God’s right hand in the heavenly realms. Now he is far above any ruler or authority or power or leader or anything else — not only in this world but also in the world to come. God has put all things under the authority of Christ and has made him head over all things for the benefit of the church. And the church is his body; it is made full and complete by Christ, who fills all things everywhere with himself.
__________

And then he told them, “Go into all the world and preach the Good News to everyone. Anyone who believes and is baptized will be saved. But anyone who refuses to believe will be condemned. These miraculous signs will accompany those who believe: They will cast out demons in my name, and they will speak in new languages. They will be able to handle snakes with safety, and if they drink anything poisonous, it won’t hurt them. They will be able to place their hands on the sick, and they will be healed.”

When the Lord Jesus had finished talking with them, he was taken up into heaven and sat down in the place of honor at God’s right hand. And the disciples went everywhere and preached, and the Lord worked through them, confirming what they said by many miraculous signs.
__________

Christ as a light; Christ as a shield; Christ beside me on my left and my right.