THANKSGIVING: My Moms Chose Adoption ~ “9 Things You Should Know About Adoption” (Reblog – The Gospel Coalition) 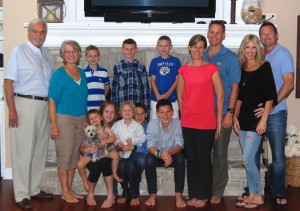 Peanut Gallery – 74 years ago my two moms (birth and adoptive) chose adoption and here I sit married for 48 years with two children and eight grandchildren and we are all most grateful for the choices these women made. Life itself is the greatest gift of all – sine qua non. The following article summarizes the current state of adoption in our country. I was one of the fortunate ones. Thank you moms.
__________

9 Things You Should Know About Adoption – click for original article

Each year in November, the President of the United States issues a proclamation to announce National Adoption Month, a time dedicated to raising awareness of the need for adoptive families and to encourage citizens to become involved in the lives of children and youth in foster care. Here are nine things you should know about adoption in America:

2. Relinquishment of infants at birth is extremely rare. Only 1 percent of children born in the United States in 1996–2002 to women 18–44 years of age as of 2002 were relinquished for adoption within their first month of life.

5. On average, a child will wait three years in foster care awaiting adoption. About 55 percent of these children have had three or more placements with foster care families, and 33 percent had changed elementary schools five or more times, losing relationships and falling behind educationally.

6. In 1851 Massachusetts passed the Adoption of Children Act, the first modern adoption law in America. The law is considered an important turning point because t required judges to determine that adoptive parents had “sufficient ability to bring up the child” and that “it is fit and proper that such adoption should take effect.”

7. The beginning of the foster care concept in America was the Orphan Train Movement. Between 1854 and 1929, as many as 250,000 children from New York and other Eastern cities were sent by train to towns in midwestern and western states, as well as Canada and Mexico. According to the Adoption history project, families interested in the orphans showed up to look them over when they were placed on display in local train stations, and placements were frequently made with little or no investigation or oversight.

Joe Carter is an editor for The Gospel Coalition and the co-author of How to Argue Like Jesus: Learning Persuasion from History’s Greatest Communicator. You can follow him on Twitter.